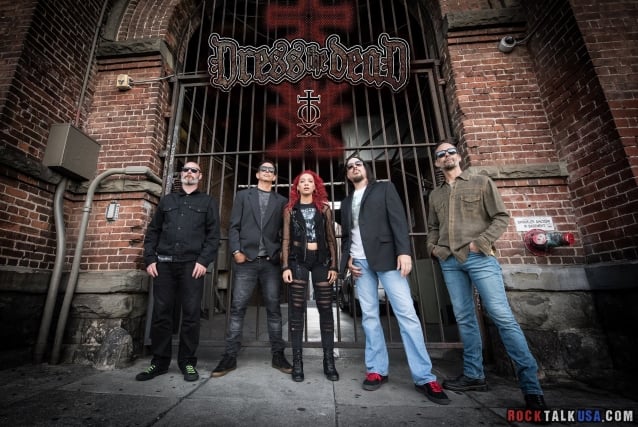 DRESS THE DEAD, the band featuring ex-FORBIDDEN guitarist Craig Locicero and WITCH MOUNTAIN singer Kayla Dixon, has released the official music video for the song "1969". The track was produced by MACHINE HEAD frontman Robb Flynn and was engineered and mixed by Zack Ohren at Sharkbite Studios.

Dixon was announced as DRESS THE DEAD's new vocalist in January. She joined the band as the replacement for former THE HAUNTED frontman Peter Dolving, who left DRESS THE DEAD in March 2017. The split happened only three months after DRESS THE DEAD — whose lineup also includes Mark Hernandez on drums, James Walker on bass and Dan Delay on guitar — played its first two shows at Slim's in San Francisco, California as the support act for DEATH ANGEL.

Kayla stated about the "1969" video: "In today's world, anyone can use social media to say just about anything. That is both a gift and a curse. We feel it is our duty as a band to use this platform that we have to touch people's hearts, minds and inspire actions. So, before you dig into this, I'll share a few of my thoughts with you.

"This video that you are about to watch is important in so many ways. With lyrics and vocals written by Peter Dolving (back when he was still in the band), this song's meaning runs deep and is still so easy to understand. That man truly has a way with words and I am so grateful to be able to help bring those words to life in this video.

"To love is to 'take as a part of oneself.' To take others best interests as your own.

"As I live my life, I can't help but notice a general absence of love for one another on this earth. Racism, sexism, selfishness, greed and narcissism among other negative elements run rampant in this world. Metal had always felt like a safe haven to me, then I started singing in bands. This meant that I was digging deeper and becoming more immersed in the metal community. Eventually, I discovered that this safe haven that I had put up on this pedestal was also infected with racism, sexism, exclusion and other forms of discrimination… almost as much the rest of this country.

"I have been blessed to work with such amazing and level-headed people in my career thus far. So much so, that this reality almost slipped under my radar. However, I can't sit back and ignore these truths. There is some black girl out there who wants to be a part of this community who isn't having as easy a time as I've had. That is why I choose to speak up.

"Less than sixty years ago, people of color in America couldn't even enter some of the same buildings as their white equals. As I sit here, holding that reality, many of my brothers and sisters are still being discriminated against. Why can't I open Facebook without seeing videos of horrible police brutality? Why does our 'President' shrug his shoulders? Why are so many of us ridiculed, looked over, and killed for simply existing? The bottom line? Being a person of color, different sexual orientation, or just being different in America today is HARD.

"It's been a long time coming and not much has changed.

"We are not here to change the minds of racists, misogynists and the willfully ignorant. If you have the capacity to hold those beliefs, then our music is not for you and I strongly encourage you to shield your eyes. Lest the truth hit you over the head like a ton of bricks!

"DRESS THE DEAD is here to rock and also inspire like-minded, kind, intelligent people to KEEP FIGHTING. Let this message be an inspiration to us to do everything in our power in our daily lives to make whatever difference we can. Now is not the time to disconnect from reality. NOW is the time to lead from the heart. If we're not constantly trying to make this life better for ourselves and others, then what the fuck are we doing except slowly dying?

"If you agree with us and want to join us in helping inspire some change, please share this video like crazy."

Kayla made her live debut with DRESS THE DEAD at the January 20 benefit concert for VIO-LENCE singer Sean Killian at The Midway in San Francisco, California.