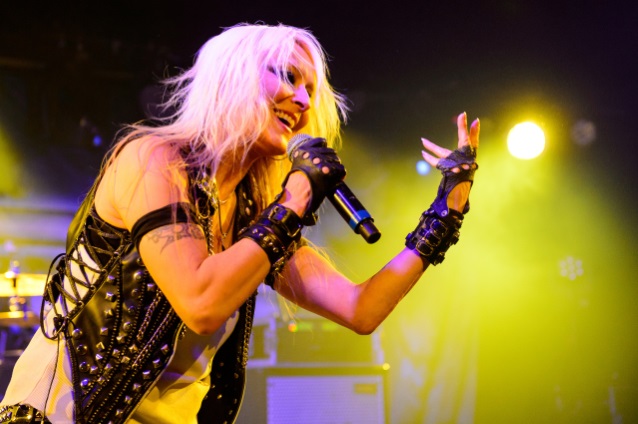 The long-awaited new studio album from German metal queen Doro Pesch will be released on August 17 via Nuclear Blast.

Doro's 20th LP, "Forever Warriors, Forever United" will be a huge milestone as her first-ever double album, so fans can expect 24 brand new songs, including some stunning surprises.

The album cover artwork was once again created by Doro's favorite artist Geoffrey Gillespie. It portrays Doro in the middle of a swarm of wild metal heads exuding attitude, power and a lot of positive vibes.

"There are some big anthems on the album, countless heavy songs, as well as heart-warming melodies! The album is supposed to give you power and thus contains a lot of energy!"

Doro continues: "On 'Forever Warriors, Forever United', there will be a lot of big rock heroes. Fans might be curious about the many awesome guest musicians involved."

Fans can note that the first single, "All For Metal", will feature several metal heroes, who can also be seen in the upcoming music video which will be released in May. "It's a great anthem — I think it could even top [WARLOCK's classic track] 'All We Are' — and everybody's singing on it," Doro said. "And this could be really, really good. It's hooky like hell."

Guitarist Doug Aldrich (WHITESNAKE, DIO, THE DEAD DAISIES) and former WARLOCK guitarist Tommy Bolan, who also contributed to the highly acclaimed LP "Triumph & Agony" in 1987, will be part of the new album.

According to Doro, the first song she wrote for the new album is a track dedicated to iconic MOTÖRHEAD frontman and Doro's longtime friend Ian "Lemmy" Kilmister. "It's called 'Living Life To The Fullest'," she says.

In the usual Doro tradition, there will also be another German-language song on the album — a midtempo track tackling the topic of a deep friendship, just as in "Für Immer".