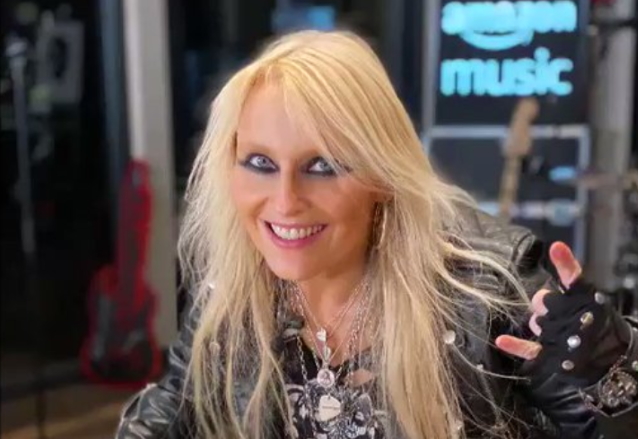 On December 28, Doro Pesch was a guest on the German cooking show "Herdbanger", hosted by IN EXTREMO's Specki T.D. A behind-the-scenes clip from the program can be seen below.

Earlier today, Doro tweeted: "My 1st cooking show was fun. Even managed to get away w/o cooking & just did a salad. Thanks 2 #herdbanger host @SPECKI_TD. Here's a look behind the scenes w/ me proving my multi tasking abilities, talking about Lemmy AND doing a salad at the same time."

The full show can be seeen in the Amazon Music app and on their Twitch channel.

Doro is currently working on material for a new studio album, tentatively due in 2021. The LP will be the follow-up to "Forever Warriors, Forever United", which came out in 2018. The double album featured 19 regular tracks and six bonus songs.

Compared to her previous efforts, "Forever United" took a more sentimental turn, with lyrical topics covering friendship, love and companionship. A highlight was Doro's tribute to the late and great Lemmy. The album cover artwork was once again created by Doro's favorite artist, Geoffrey Gillespie. It portrayed Doro in the middle of a swarm of wild metal heads exuding attitude, power and positive vibes.

Pesch played three drive-in concerts in her home country this past summer. The shows complied with Germany's social distancing regulations amid the coronavirus pandemic.

Doro released a video for her new single, "Brickwall", in June. The track was made available digitally via Nuclear Blast and on vinyl on July 31.

My 1st cooking show was fun. Even managed to get away w/o cooking & just did a salad ?? Thanks 2 #herdbanger host @SPECKI_TD. Here's a look behind the scenes w/ me proving my multi tasking abilities, talking about Lemmy AND doing a salad at the same time.
??❤️#Love, #Doro pic.twitter.com/kxkZJAsIBR