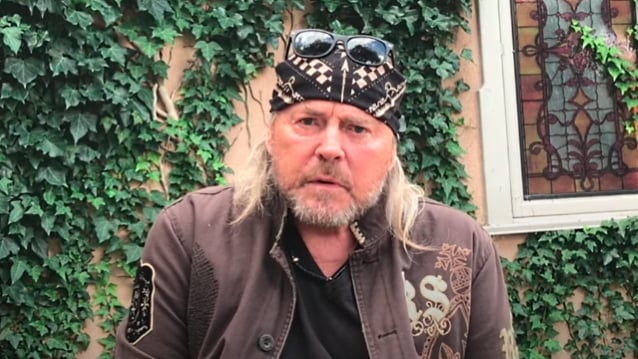 Banali, who joined QUIET RIOT in 1982 and played on its breakthrough album, 1983's "Metal Health", the first heavy metal LP to top Billboard's album chart, died in August after a 16-month battle with pancreatic cancer.

Speaking to Rock Confidental, Don said about Frankie: "It's interesting. Frankie played in DOKKEN. We did, like, five shows with him. It was right after the Germany tour in '79. Greg Pecka left the band for religious issues. He was a Scientologist. I actually went back to Germany in 1980 and had another lineup. I ended up getting Gary Holland to play drums on the next tour. That was my connection to why I ended up producing the first GREAT WHITE album. But after Greg left, we had shows coming up. I called Frankie. I'd known him from the scene.

"Funny story about Frankie, he had a Corvette like I have," he continued. "I believe it was a '65 black convertible. It's actually in the video for 'It's Not Love'. That's Frankie driving. He was starving. He was roughing it. I remember his front brakes were trashed.

"I'd always worked on Corvettes. I was a mechanic and I knew how to fix Corvettes. My first car in high school was a '63 split window, which is now the holy grail of Stingrays. If I'd kept that car, I'd be a very, very rich guy. They're going for like a half million dollars now. They only made it one year. The government said the split window was too hard to see out of.

"I remember in front of his house, he lived up in Hollywood. I went over to his house and hung out. I jacked up his car in the street — totally illegal — put it on stands, tore off the tires, and I put new brake pads on his car. That was our deal. You fix my brakes and I'll play your shows.

"I knew Frankie way back in the day. Obviously, our friendship goes way back to the '70s.

"I was sad to see him pass," Don added. "Over the past 30 years, we've played many, many shows with QUIET RIOT. I knew Kevin DuBrow. VAN HALEN put out their first record in '78. We played a show at a club called the Starwood. I still have a flyer. The lineup was VAN HALEN, QUIET RIOT, DOKKEN. We did two nights, sold out at the Starwood. It was as popular as the Whisky, just right down the street on Santa Monica Boulevard. We all knew Randy Rhoads. He was a great guitar player. He had just joined Ozzy's [Osbourne] band. Those were Randy's last two shows with QUIET RIOT before he went to do the 'Blizzard Of Ozz' thing. VAN HALEN went off to do their first album, and I took off to Germany."