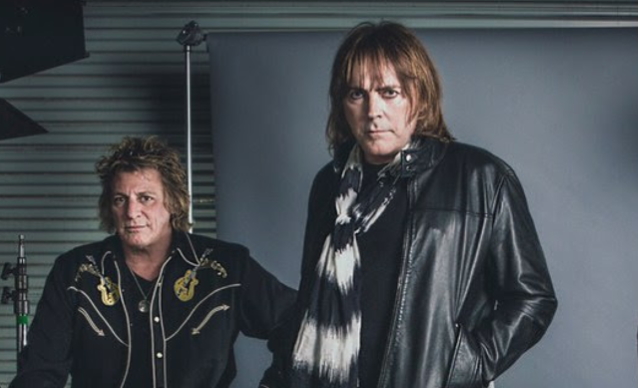 Don Dokken spoke to Full In Bloom about DOKKEN's longtime drummer "Wild" Mick Brown, who left the band last year due to health issues. He said (hear audio below): "I remember the day he quit. We were at the airport. And we knew he was struggling — his knees hurt, his arms hurt, his elbows hurt, his fingers hurt. And I remember he pulled me aside. We only had three shows to go, and we had a couple of days off. And we were standing outside in front of the airport, and he says, 'Look, man, I can't do this anymore. I just can't.' And I said, 'You're not happy?' And he goes, 'No. I just can't physically do it. I'm done. I've been playing drums for 50 years, since I was 10 years old, and my body is worn out. My back hurts.'"

He continued: "There was, like, little signs. We'd get off the airplane and we'd be taking our carry-ons and walking to baggage and Mick would be way behind us walking real slow and limping. His hips hurt, his legs hurt. He just wore himself out, like a football player. You play football and you get beat up long enough, you can't play football anymore. And Mick had the hardest job in the whole band. I'd like to see anybody bash those drums for 50 years and not get injured. Same as Neil Peart and RUSH. He retired because of all his physical problems, because you play drums and it kicks your ass. Just flying would hurt Mick's back and his hips — just sitting in a plane. He'd be in a lot of pain. A couple of times, I used to have to help him out of his seat because he was just hurting."

Asked what Brown is doing now, Dokken said: "Honestly, I have not spoken to him since the day he left the band. We were friends for 40 years. He went off social media and shut all his social media down, and his web site. I heard, a week after he got home, he put his drums up for sale, and I hear that he's just living in Arizona, riding his Harley and kicking back and playing PlayStation. But he kind of, for some reason, broke off contact with everybody. I know he did a video with [George] Lynch and [Jeff] Pilson and Robert Mason called THE END MACHINE, and he's playing drums on that, in the video. But I did notice in the video of THE END MACHINE — I know Mick pretty well and I could see Mick in the shots and he's playing a lot softer than he used to. But I have not spoken to Mick since the day he left the group, which is kind of sad, 'cause I always thought of us as really good friends. We grew up together… Mick sees it as his past and he just wants to let it go."

Brown's replacement in DOKKEN is BJ Zampa, who has previously played with HOUSE OF LORDS.

DOKKEN's classic lineup — including Dokken, Brown, Lynch and Pilson — reunited for a short Japanese tour in the fall of 2016. The trek marked the first time in 21 years the four musicians had hit the road together.