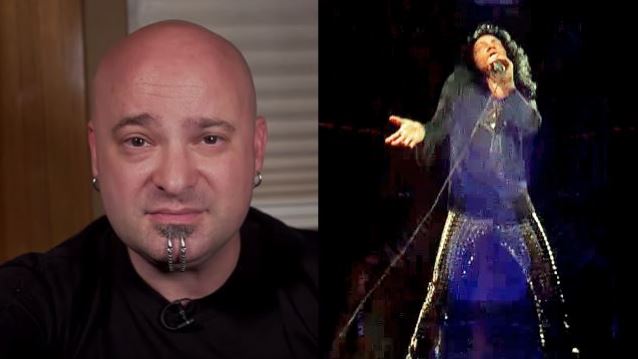 DISTURBED frontman David Draiman says that he has mixed feelings about the hologram of Ronnie James Dio, which made its debut at the Wacken Open Air festival in Germany on August 6. Created by Eyellusion, the surprise appearance of the heavy metal icon during DIO DISCIPLES' set closed out the massive metal event which was attended by more than 75,000 fans.

Speaking to Argentina's Vorterix radio, Draiman said about the Dio hologram (transcribed by BLABBERMOUTH.NET): "It makes me sad. I'm always happy to hear any music from anybody that's left us, that we've lost. But I don't know… The hologram thing, to me, it almost isn't letting the dead be dead. And… I don't know… It just seems weird. It seems no different than… Is there a difference between a hologram and a guy dressing up like Ronnie James and doing it? You know what I mean?"

He continued: "Ronnie was Ronnie, and he was the best in the entire damn world. Whether you're doing it with somebody like Ronnie James Dio or Michael Jackson or whomever, it just seems like, you know what? Respect the legacy. And me personally, I don't know… It kind of bothers me. Maybe it's because I love Ronnie so much and revere him as a god of vocal ability. So… I don't know. It just bugs me."

Draiman was also asked whether he thinks any of the newer hard rock artists have a shot at becoming arena-sized acts once the current crop of dinosaur bands are no longer around. He responded: "Look, one can only hope, pray and try to become a legend. It's not something that's guaranteed, it's not something that's automatic, there's no scientific formula for it. But one thing that people need to reconsider here is that the elements that existed that made the Lemmys, the Ozzys, the AC/DCs and METALLICAs of the world — MTV, big rock radio; things of that nature — don't exist anymore. So it takes longer, and it takes more persistence, and it takes more consistency these days to achieve that level. Maybe it can't be done in twenty years. Maybe it takes a lifetime. And if that's what it takes, given the change in this environment, then that's what it takes."

He added: "I certainly believe — I certainly believe… I'm not saying that any of my colleagues and my friends, whom I admire and respect tremendously — there's so many people in this genre that I find tremendous inspiration from — I'm not saying that we are equating ourselves or that we are even anywhere close to what these guys have achieved, 'cause sometimes it's simply not possible. They're anomalies. How can you try to be something that is a once-in-a-lifetime thing? The Freddie Mercurys of our time. I think that they are there. To me, I still see it. And I'm not gonna start calling out individual names, because either I'll name somebody that people disagree with or I'll leave somebody out and somebody will get pissed off. [Laughs] But I definitely think that there's a future generation, and there's even a current generation of luminary rock stars out there who don't have the kind of visibility that, in the past, used to be able to make [that] happen. And that'll come in time."

Ronnie James Dio's widow/manager Wendy, who manages DIO DISCIPLES and is also a member of the Eyellusion team, recently said that the fans at Wacken Open Air "really got it, and they loved" the Ronnie hologram. She explained: "I think you have to see it, really, to know what it's about. It's amazing. It's like having Ronnie back again, which is wonderful. It was very emotional. I didn't think that I was gonna cry, but I did. I broke down. And a lot of fans were there with me, and it was comforting that they were feeling the same thing I was feeling."

She continued: "Some of his crew members that were there, like Paul Dexter, who did all the designs and was Ronnie's lighting designer and stage designer for years — he was the one who designed the 'Sacred Heart' set — he was the one who was there, and he was crying. I mean, everyone that knew Ronnie, it was so realistic. It was just like having him back on stage again."

Special thanks to Catalina Bonadeo from Vorterix for providing the audio of the Draiman interview.