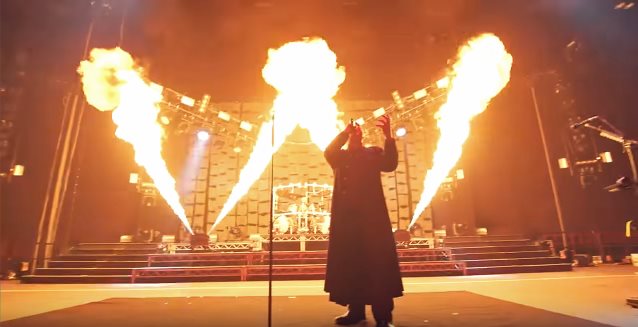 DISTURBED's video for the title track of the band's 2015 comeback album, "Immortalized", can be seen below. The clip was filmed in several venues across North America, Australia, and New Zealand in late 2016.

DISTURBED was the most played act of 2016 at the Active Rock radio format, according to industry metrics released by Mediabase, which monitors and analyzes airplay in over 180 U.S. and Canadian markets on both terrestrial and satellite radio. The band's success was bolstered by several chart-topping singles from "Immortalized", including its massive hit cover of SIMON & GARFUNKEL's classic "The Sound Of Silence".

The other No. 1 singles from Immortalized included "The Vengeful One", "The Light" and "Open Your Eyes".

In addition to being the most played artist, DISTURBED also had the second most played track at Active Rock with "The Sound Of Silence".

DISTURBED singer David Draiman told The Pulse Of Radio that he still hasn't gotten his head around the success the cover has had. "It doesn't stop being surreal," he said. "Every single step of the way, it's another incredible surprise, it's incredibly gratifying, and it's succeeded way above and beyond our expectations."

"The Sound Of Silence" was certified platinum last June for sales or downloads of more than one million copies, while "Immortalized", DISTURBED's fifth No. 1 album in a row, hit gold in September for 500,000 copies sold.