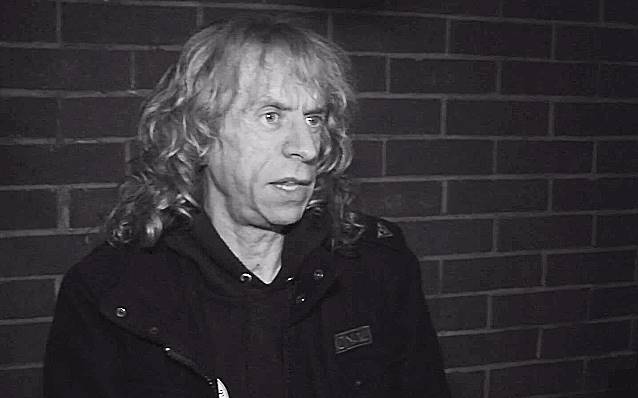 Slayed In Oregon conducted an interview with guitarist Brian Tatler of NWOBHM (New Wave Of British Heavy Metal) legends DIAMOND HEAD on October 11, 2013 in Portland during the band's North American tour with RAVEN. You can now watch the chat below.

DIAMOND HEAD singer Nick Tart sat out the band's recent U.S. tour due to the untimely death of his father. In order to maintain its commitment to the group's fans, DIAMOND HEAD called upon vocalist Chas West (JASON BONHAM, LYNCH MOB, TRIBE OF GYPSIES), who has been a longtime friend of the band, to help out for this tour.

DIAMOND HEAD was touring to support its latest Universal compilation titled "Am I Evil: The Best Of Diamond Head".

For the first time in its four-decade history, DIAMOND HEAD made its way stateside for a U.S. tour in the summer of 2011.

DIAMOND HEAD's first-ever appearance with the "Big Four" (METALLICA, SLAYER, ANTHRAX and MEGADETH), the artists on whom they had a major influence, in July 2011 at the Sonisphere festivals in the U.K. and France, was followed by their first performances in Canada, playing with MOTÖRHEAD, and MEGADETH at the Heavy TO festival in Toronto, along with an appearance with GIRLSCHOOL, MOTÖRHEAD and KISS, at the Heavy MTL festival in Montreal.