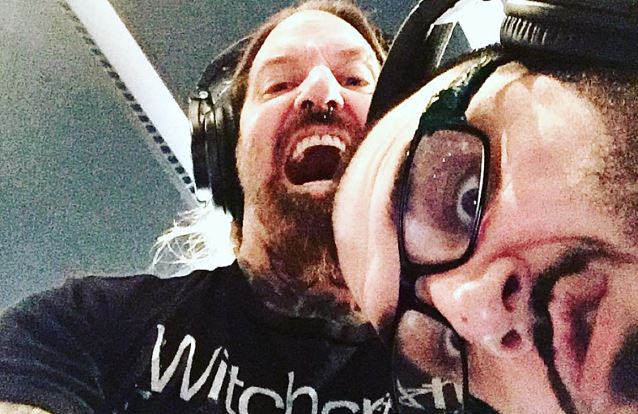 California metallers DEVILDRIVER will release their seventh studio album, "Trust No One", on May 13 via Napalm Records. The follow-up to 2013's "Winter Kills" was once again produced by Mark Lewis (ARSIS, THE BLACK DAHLIA MURDER, WHITECHAPEL, DEVILDRIVER, DEICIDE, SIX FEET UNDER) with assistance from Jason Suecof (AUGUST BURNS RED, DEICIDE, DEATH ANGEL). The new CD mark the group's first release since the departures of guitarist Jeff Kendrick and drummer John Boecklin and addition of axeman Neal Tiemann and former CHIMAIRA sticksman Austin D'Amond.

A short audio sample of a song from "Trust No One" is available in the Instagram post below from DEVILDRIVER fontman Dez Fafara.

"'Trust No One' is filled with killer riffs, groove after groove and massive hooks!

"Regarding the title 'Trust No One', it's rightly named and done so. There will be no explanation needed regarding what the title means. The lyrics are volatile and straight to the point!"

Asked what makes Austin the right drummer for DEVILDRIVER, Dez told Full Metal Jackie: "What made him the right guy is he's more than capable.

"You can understand when members leave a band, and Jeff, the guitar player, left 'cause he just didn't wanna tour anymore, and I totally understood that after the schedule we kept for almost 13 years. And John wanted to try and do some stuff on his own, and it was more than okay with me after that length of time. So, when you do replace members, what you wanna do is you wanna get people who are more than capable — or more capable than even who you had [before]."

He continued: "I definitely am looking forward to playing with Austin. He's a great guy, he's a great drummer, [and] he's got an incredible stage presence. And when he came in for the audition, he absolutely just smoked it. He's just an incredible guy. And you get a real good vibe from him, which is another thing. We're gonna tour a lot, so you're gonna have to have that."

"EAST OF THE ANCIENT SUN BEYOND THE VALLEY OF THE CORPSES , ILL BE WAITING FOR YOU ,WHERE ALL LOSS OF HOPE IS ,NO REMORSE I SPIT ON YOUR CORPSE NOTHING LEFT TO DO , BUT PUT MY BOOT ON YOU , IVE GOT NO REMORSE ! " #TheCaliforniaGrooveMachine #Lyrics