Southern California's groove metal band DEVILDRIVER will return to the road this August and September on a headline tour featuring special guests 36 CRAZYFISTS, CANE HILL, UNCURED and TETRARCH. The trek starts August 18 in San Jose, California and wraps up September 22 in Lubbock, Texas. A complete list of dates can be found below.

"I am proud to announce the next DEVILDRIVER headlining through the United States," says DEVILDRIVER frontman Dez Fafara. "We are bringing Our great friends 36 CRAZYFISTS who we haven't toured with in years as well as CANE HILL, UNCURED and TETRARCH. Come out to a show and get in the pit! See ya there!"

In addition to the upcoming tour, DEVILDRIVER will appear as part of this year's Chicago Open Air festival on Sunday, July 16.

DEVILDRIVER is continuing to tour in support of its latest album, "Trust No One", which was released in May 2016 via Napalm Records. The follow-up to 2013's "Winter Kills" was once again produced by Mark Lewis (ARSIS, THE BLACK DAHLIA MURDER, WHITECHAPEL, DEVILDRIVER, DEICIDE, SIX FEET UNDER) with assistance from Jason Suecof (AUGUST BURNS RED, DEICIDE, DEATH ANGEL).

DEVILDRIVER is currently working on an outlaw country covers album, "Outlaws Till The End", tentatively due in early 2018. The disc will contain thirteen "insanely heavy, swinging badass outlaw tracks by some of the best outlaw country artists," including Willie Nelson, Johnny Cash, Waylon Jennings and Johnny Paycheck, according to Fafara. Produced by Steve Evetts, the album will feature appearances by nearly two dozen "high-caliber guests," among them Glenn Danzig, LAMB OF GOD's Randy Blythe, TESTAMENT's Chuck Billy and guitarists John 5 (ROB ZOMBIE) and Mark Morton (LAMB OF GOD). 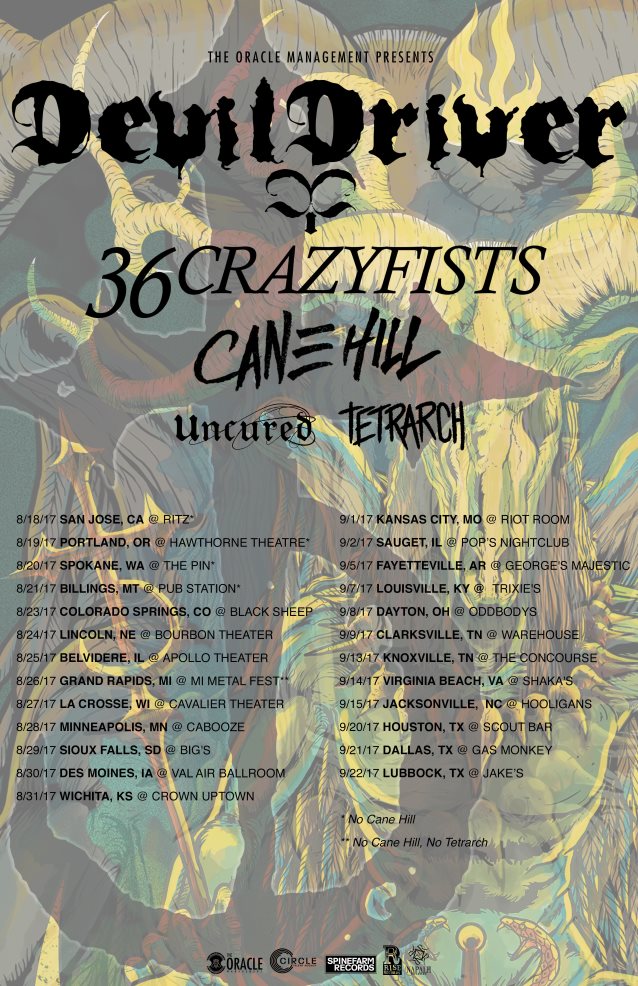