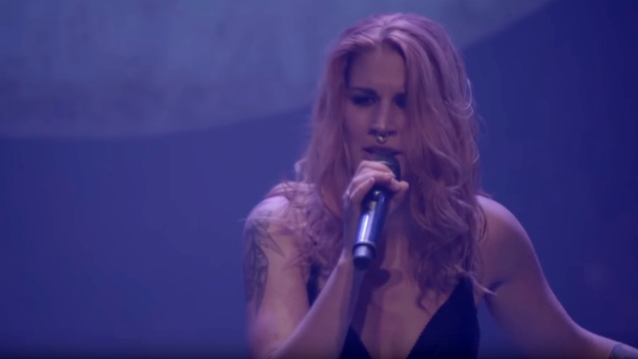 Rhino Radio conducted an interview with frontwoman Charlotte Wessels of Dutch symphonic metallers DELAIN prior to the band's February 6 show at O2 Institute in Birmingham, England, United Kingdom. You can watch the entire chat below. A few excerpts follow (transcribed by BLABBERMOUTH.NET).

On DELAIN shifting from moon-based themes to the state of the world on their latest studio album, "Apocalypse & Chill":

Charlotte: "It's over between the moon and me. [Laughs] No, we had the album and the two EPs and it was kind of a triptych, but that trilogy is done. Three moon-themed albums are enough. Still, I thought if I'm done with it, then I'm sure the audience is done with it, but still, a lot of people were really fascinated, shocked, even, by the new title and the new artwork and the theme that we're jumping on now with 'Apocalypse & Chill'. I consider it a good thing. I've been watching it with anticipation because I know we're going a different route because people expect the moons and the crows and the roses and the gothic, romantic kind of imagery. Of course, 'Apocalypse & Chill' has none of that. I'm excited about the direction. I'm excited about the topics that we're covering."

On whether there is a silver lining to the "Apocalypse & Chill" album title or it serves as a warning to people:

Charlotte: "Not at all. I, myself, am very optimistic about the things that we can do. I think the title 'Apocalypse & Chill' is very much just a reflection on the way that the world looks today. There is no judgment in the title, but there is such a big contrast between what you see when you open a newspaper, you see the world quite literally being on fire, and then what you see when you open your social media and you see everybody's perfect lives. Those two kinds of [things] don't seem to match. Then, of course, the next topic is how do we feel about that and do we need to do something about that? But that is a question that I'm very happy raising through the music, but I will never want to give answers as a band through music because I don't want to underestimate our listeners by telling them what I think is right and I also don't want to pretend that I am the one with the answers to that because I don't, we don't, actually, even within the band, we all have different ways of dealing with these issues and thinking about them. But the issue itself is very universal; it's something we all will have to deal with at one point or another. For me, it's a very interesting topic and the silver lining is for me is that there are things we can do, even if it's very little things: adjusting your diet or adjusting where you get your energy. Everything that you buy, everything is a choice. I'm a very big believer of the term 'the personal is political' even if you think you're not political. In everything you consume, you're choosing to support one company or another, even in those little things you do it really matters where you get the vegan sour candy or the non-vegan one. [Laughs] Those kinds of things. I think that we can gain a lot by doing some of the little things, but that's just my opinion. Like I said, everyone has to think for themselves what they are comfortable doing."

On whether musicians should be responsible for "opening the eyes" of their listeners:

Charlotte: "I think that musicians can decide for themselves what their entry into music is. Music can be a lot of things. It can be just something for people to turn off their minds and there are certainly also just songs that are enjoyable to listen to and maybe forget your problems instead of raising new ones. I definitely don't think that everyone should be concerned with worldly topics in their music. Music can be very helpful even if it just lifts your spirit for a little bit. For me, personally, I tend to write about the things that occupy my mind and it feels kind of deceptive to write an album like 'Everything is fine! Nothing's happening. We're all going to live until we're a hundred and so are our babies!' That just feels wrong, so it kind of organically works its way into the music if it's on my mind a lot."

On the issues of sexism and racism in the music scene:

Charlotte: "I think support a platform that people are using to take their message across and if you're sharing that platform, push forward to people whose voices who are easily marginalized. Don't start talking for people. I think supporting your friends is a very important thing to do. I think that it helps a lot if the media doesn't consider — for example, in metal, women used to be a minority and every time there was a woman, then people would really accentuate that and say 'What is it like to be a woman in metal?' I would like them to ask 'What's it like to be a musician?' Or 'How do you feel about your music or the musical landscape?' But not so much how I am different. The question, 'How are you different from other singers?' I'm, like, 'Aren't there enough women in metal already? Aren't there enough men in metal already?' The question itself doesn't really make sense. I feel that in general if we're not so surprised when people turn up, then they might actually feel a lot more welcome. People have asked me, 'Don't you feel welcomed in music?' I'm, like, 'I've always felt welcomed. But people can be very welcoming without taking you seriously sometimes.'"

On whether she wishes no one cared about her gender:

Charlotte: "I noticed that I talk about being a woman or my views on sexism in almost every interview that I do. And I think it's a very important topic, so I definitely appreciate it. On the other hand, if people read interviews with my peers or my bandmates, they will hear them talk about the music. If people read interviews with me or hear interviews or watch this interview, they will hear me talk about being a woman in metal. It makes it seem like being a woman is a much bigger part of my identity than it actually is, because when I am here, I feel like a musician first and foremost. There's a difference in the fact that I spend some time on makeup, which has been something I've been ashamed to admit or to do as well because there are some stereotypes that you cannot be very feminine and then people think, 'She's just a frontwoman like the picture.' They don't expect you to write your songs yourself and those kinds of things. It is kind of problematic. As much as I appreciate the question, yeah, the outcome is that this is another interview where I'm talking about… I think maybe a solution would be to ask more guys about it. That could be interesting. It might balance it out. More questions about music towards women and non-men and non-binary people. But, in the end, I feel that if we're in music, we want to do music and it makes sense to talk about that."

"Apocalypse & Chill" was released on February 7.