DEF LEPPARD singer Joe Elliott spoke to SiriusXM's "Trunk Nation" about the band's upcoming "The Stadium Tour" with MÖTLEY CRÜE, POISON and JOAN JETT & THE BLACKHEARTS. Asked if he is surprised by the trek's out-of-the-gate's success, Joe said: "When you put something on of this magnitude, you hope for the best and kind of expect — well, not the worst, but expect normality, I suppose. DEF LEPPARD have notoriously never [sold out] shows out of the box, [but] we've always closed really well. So we'd be turning up to a gig sold out, but sold out 20 minutes before we went on stage. This is kind of like 'Hysteria' all over again, really. Obviously, a lot has to do with the fact that we've got MÖTLEY on board and you've also got POISON and Joan Jett. It is an enormously attractive package, is what it is. But the fact that we had shows selling out within minutes of going on sale — if that happens in a club, you're kind of chuffed and happy; if it happens in a theater or an arena, you're ecstatic; but when it happens in a stadium, you're kind of gobsmacked. You're standing there looking at the phone when your manager is telling you this, going, 'Are you kidding me? [Laughs]

"I'm a nerdy fan as well; I'm not just a businessman or something like that. I'm just this guy that… I'm inside this big, giant machine, but I'm trying to look at it from the outside of what it was like when I heard that LED ZEPPELIN put Knebworth on sale and it sold out in a day," he continued. "As a fan, you're really so happy for your band, that this band that you're a big fan of are doing so well; it justifies your faith in them and that kind of thing. I try to look at it from two heads, really — as a fan and as a guy in one of the bands. So it really was unbelievable when they said, 'Well, we're gonna be adding shows, because it's really taking off.' I mean, who knows where this could go? Because this is just the beginning, potentially. It all depends on everybody's availabilities and staying power to carry this on, but this tour could add even more shows maybe not even this year — next year. It's all up in the air; nothing's written in stone. But these 22 that were initially put on has at least gone to 28, and 10 of them are pretty close to sellouts, if not already sold out. So it really is a testament to the fact that when people say, 'Rock is dead,' the four of us artists can stand there and look everybody straight in the eye and go, 'No, it's not.'"

Asked if DEF LEPPARD and MÖTLEY CRÜE will have equal set times and rotate as headlines on the entire run, Joe said: "I think they're still working on who gets [to close the show] where. We're very flexible when it comes to stuff like that. If somebody's got a favorite town or it's their hometown, they can have it. We did that with JOURNEY — we let them have San Francisco, because it was the honorable thing to do; we got New York. So, yeah, it's 30 shows, and it'll be 15 each. But everybody gets their full production. Everybody gets the same amount of time. It's more like a carnival where it doesn't really matter what order everybody is in.

"You've gotta remember — Joan Jett's gonna go on first," he said. "I mean, just look at the catalog of songs that she has. When we went out with JOURNEY 18 months ago, we had, for five or six gigs, we had THE PRETENDERS. Can you imagine what that was like for a stadium full of people listening to a short but very vibrant set by by THE PRETENDERS, Chrissie Hynde really doing her thing. We had Peter Frampton doing his thing when we were up in Toronto, and that was just amazing. We actually were going out there like fans to watch it. I mean, I bought 'Frampton Comes Alive'; I wanted to see it. I bought every PRETENDERS album; I wanted to see them. And Joan Jett, we've toured with her twice before. She's an incredible artist and such an energetic — just a ball of energy. So, they've got their thing to do as well. They won't be playing as long as we do, of course, but I just think the overall thing is gonna be huge. But, yeah, us and MÖTLEY, we'll take it in turns to close out the shows."

Elliott also spoke about the pressure of having to come up with a production that will rival MÖTLEY CRÜE's live show, which has in the past included plenty of stage theatrics. pyrotechnics, and even a roller coaster ridden by drummer Tommy Lee.

"That doesn't worry us; it never did," Elliott said. "And I don't mean this as a slight on any other band, but when we've got a catalog of songs like we've got, we've always kind of — not shied away from massive pyros and all that kind of stuff… We've tended to think that sometimes bands overuse stuff like that because there was something else missing. It's not always true — I think with KISS and MÖTLEY and, to a point, METALLICA, you use it for effect, and that's cool. What we use for effect is lasers, and there's back screens with the history of the band playing away in the background or some abstract art that goes with the song very well. So it's eye candy. You've gotta remember — when people come to stadiums, they're not just listening, they're watching, so you do have to put some kind of a show on. But the way that we've always been is I've never been flashy like, say, a David Lee Roth or something like that; I've always just been more — just that British restraint that Brian Johnson has or Robert Plant has, where you just do your thing. And that's what LEPPARD have always been. We've always tried to just put on a classy show — that's always what we've tried to do. And [without paying attention to] what the band before or after us does, we do what we do. And I think that over the years, people have got to know what we're like live. If they've seen us before, they know exactly what to expect in the sense of, it's never gonna be below a certain standard. But trying to outdo MÖTLEY's roller coaster or basses exploding or Gene Simmons's blood dripping out… We never went there — we didn't see the point. It wouldn't be real if we started to do things like that, because we never did it in the past. I could come out on a bicycle, I suppose. [Laughs] Rob Halford has done the motorbike to death. I could come out and roller skate. I mean, I don't know. We'll just come out there and play our songs, and interact with the crowd as people. It's what we've always done."

"The Stadium Tour" will kick off on June 21 in San Antonio, Texas and will include newly announced gigs in Kansas City, St. Louis, Minneapolis, Nashville, Cincinnati and Cleveland. The trek marks CRÜE's first live dates since wrapping its 2014/2015 farewell tour. The band toured with POISON back in 2011 and DEF LEPPARD teamed up with POISON for a string of road dates in 2017 — but the upcoming jaunt marks the first time all four acts have hit the road together for an extended tour. 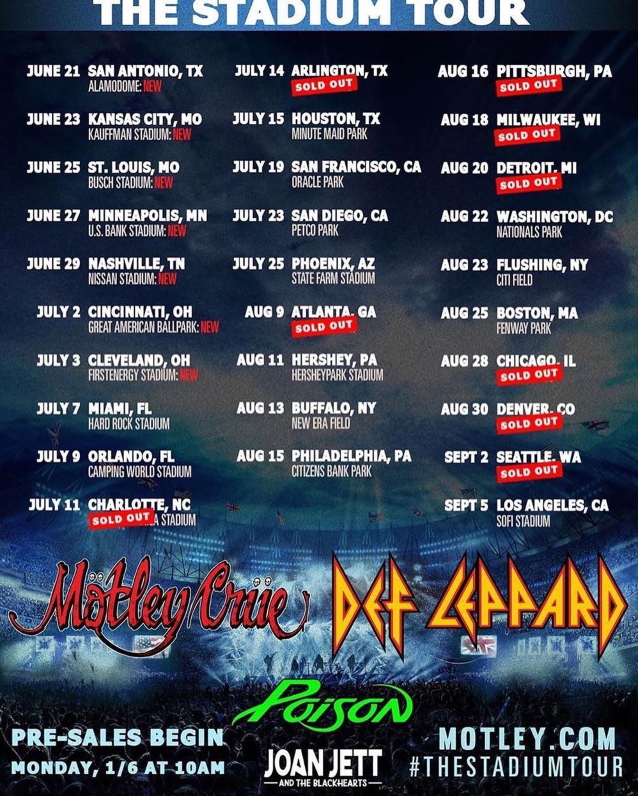