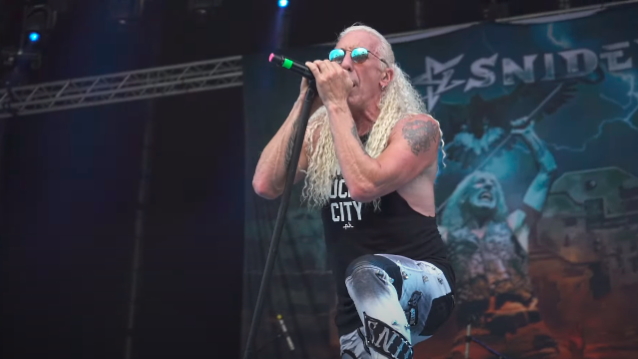 TWISTED SISTER singer Dee Snider will release "For The Love Of Metal Live!" on July 31 via Napalm Records. The DVD/Blu-ray and accompanying live album (available in various formats) features audio captured from several Snider festival performances worldwide — from the United States to Europe, Australia and beyond. In addition to tracks from Snider's solo catalog, like "I Am The Hurricane" and "For The Love Of Metal", TWISTED SISTER favorites such as "I Wanna Rock" and "We're Not Gonna Take It", and even a cover of AC/DC's "Highway To Hell", the audio portion of "For The Love Of Metal Live!" also features a brand new original studio track, "Prove Me Wrong".

A performance video for the song "For The Love Of Metal", taken from the upcoming DVD/Blu-ray, can be seen below.

Snider says: "When Jamey Jasta told me his idea for this song, I thought it sounded crazy. But after we were done putting it together and recording 'For The Love Of Metal', I knew we made a statement that not only needed to be made, but will speak for the heavy metal community for years to come. Because at the end of the day, we are all fucking metal! This is my new favorite song to perform live!"

Snider added: "The response to 'For The Love Of Metal' was so strong, and my new band so good, that I wanted to capture 'Dee Snider' for the new millennium. All of my other live concert releases are all about the past. And while my past is represented here, it is presented along with my new music, played by my new band and is very much 'in the now.' The included interviews give insight into my world, my journey and my evolution since I started nearly 50 years ago."

"For The Love Of Metal Live!" track listing:

"For The Love Of Metal Live!" will be available in the following formats:

In a separate interview with Distorted Sound, Snider said that he has found his place in the contemporary music scene with "For The Love Of Metal". "I'm so happy to be doing this," he said. "This record defines me as a person who wants to feel vital what I'm doing now matters and counts. I'm so happy I thought there wasn't that place in music for me. I've been doing Broadway, radio, TV, movies, I've been finding my place now with other things that I've been doing, but my first love is metal and music, and to do a record that I feel is a place now… My wife said she hasn't seen me this happy in a long time, and I'm always happy. She said I have an odd, childlike glee. It's crazy. I know, I'm [65] and not that I feel it. I'm healthy, people see me rock and their minds are blowing. I didn't think at this point in my life, this would be happening."