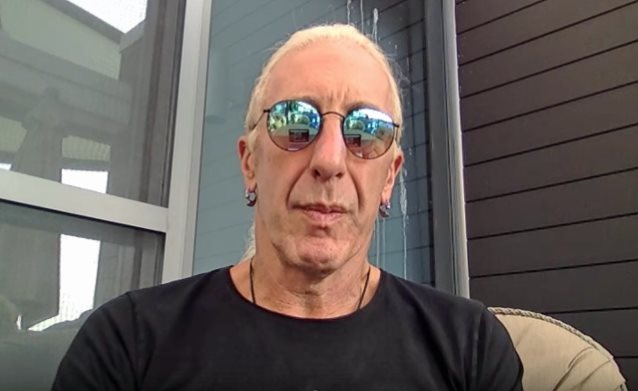 During an August 17 appearance on the "Trunk Nation" show on SiriusXM channel Volume (106), Dee Snider spoke about TWISTED SISTER's decision to call it quits last year after completing a farewell fortieth-anniversary tour.

"Basically, the level of intensity that I performed at with TWISTED SISTER, I had to stop while I could still deliver that before I could no longer deliver that," the singer explained. "The headbanging, the thrashing, all that energy… Where Alice [Cooper] always seemed like a crotchety old dude, and he's crawling around the stage, that works great for a 72-year-old dude now. But what I did does not work for a 62-year-old. I mean, it's just too fucking hard to stay in the shape. Just to keep that going just got harder and harder. I said, 'I wanna stop while people are still smiling and not looking at me saying, 'Oh, remember when he was good?''

According to Snider, he has had to approach his live performance differently while touring around the world with his new solo band.

"Everything I'm doing now, there's no more headbanging involved," he said. "My neck just about had it. And with TWISTED, I had to stop headbanging. And as long as I'm on stage with TWISTED SISTER, I just could not perform with that band and just not want to… I had to thrash. So I felt if I stepped out of that, I don't know if just… At least I could say, 'Hey, I'm doing some new things, I'm trying some new things, and I'm not… I'm not in TWISTED SISTER. I'm Dee Snider now.' And people seem to be cool with it. And I'm cool with it, because, for some reason, without having that big 'TS' [logo] hanging over my head, I don't feel this obligation to get out there and just start doing that [thrashing around]."

Dee said that he wanted TWISTED SISTER to go out at the peak of its game before it became embarrassing. "I didn't wanna have that Mike Tyson moment where you're crawling around on all fours looking for your mouthpiece," he explained. "I'll never forget that image in my head. There was film footage of Babe Ruth playing with… I don't know who they traded him to, but when he left the Yankees, and he's literally walking around the bases 'cause he can no longer run at all. So I did not wanna ever have that happen… And now, separate from TWISTED SISTER, people are coming down [to see my solo band] and going, 'Well, he's not as intense as he was.' I'm hopeful that people will go, 'Well, that was TWISTED SISTER.'"

Following the terrible events of September 11, 2001, TWISTED SISTER's classic lineup reunited to headline the New York Steel benefit show at the Hammerstein Ballroom in New York City on November 28 that year. The concert was a fundraiser for the families of New York police officers and firefighters who had lost their lives in the attack on the World Trade Center. The reaction to TWISTED SISTER's set was overwhelming and led directly to the band's reunion career, which lasted almost fifteen years.

Dee said that TWISTED SISTER's comeback was partly inspired by another legendary band that he saw a couple of years earlier.

"Someone said… I wish I could remember… I think it was Wednesday 13… And he said, 'When a reunion show is good, it makes you feel young again. But when it's bad, it makes you realize how old you've gotten,'" Snider said. "And before TWISTED SISTER reunited, I saw UFO, so that was, like, 2000, 1999 when Michael Schenker was with them. And I was like a freakin' kid — I was fighting my way to the front; I felt like I was in high school again. They looked great, they played great. And I even followed them. I said [to my wife], 'We're gonna go to the next town to see 'em.' And she said, 'What are you, fucking sixteen?' I had to go see the next show, because they made me… So when TWISTED reunited, I said, 'That's how I want people to feel.' I don't want them to look up there and go,' Damn! We've gotten old.'"

Dee added that he is satisfied with TWISTED SISTER's decision to say goodbye and pursue other projects.

"I love the guys in TWISTED — we're still friends and we ended on a great note," he said. "And I love those guys and the legacy. And with the release of [the] 'We Are Twisted F***ing Sister!' [documentary about TWISTED SISTER's early years], where people got to know the road, how hard we fought for where we got, I just felt it was a good time to end it."

TWISTED SISTER's biggest hit was 1984's "We're Not Gonna Take It", which peaked at No. 21 on Billboard's Hot 100 chart. Their original run ended in the late '80s. Since reforming, the band has released live albums, holiday albums, and re-recorded its 1984 LP "Stay Hungry", in addition to playing live.

Dee's solo album, "We Are The Ones", was released last October via Red River Records (distributed by BFD/RED). Produced by Damon Ranger, the disc was described by Dee as "an album that is think part FOO FIGHTERS, part IMAGINE DRAGONS, part THIRTY SECONDS TO MARS." He added: "Forget anything from the past. Most of my heavy metal fans are gonna hate it; I've abandoned my past to move forward."