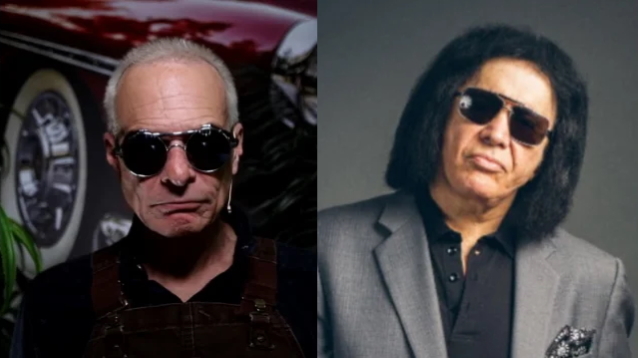 David Lee Roth has fired back at Gene Simmons over the KISS bassist/vocalist's recent comment about the VAN HALEN frontman.

Roth performed as the opening act for the February/March 2020 North American leg of KISS's farewell tour, but is not making any appearances on the rescheduled KISS shows which kicked off on August 18 in Mansfield, Massachusetts.

Asked in a new interview with Rolling Stone about Roth's absence from the "End Of The Road" trek, Simmons said: "It bears noting that during Dave's heyday, nobody did what he did. He was the ultimate frontman. Not [Robert] Plant, not Rod Stewart, nobody. He took being a frontman way beyond anything. And then, I don't know what happened to him… something. And you get modern-day Dave. I prefer to remember Elvis Presley in his prime. Sneering lips, back in Memphis, you know, doing all that. I don't want to think of bloated naked Elvis on the bathroom floor."

Earlier today (Friday, August 20), Roth shared a black-and-white photo of a little kid wearing sunglasses and sticking his tongue out with his middle finger extended, and he superimposed the text "Roth to Simmons:".

In a January 2020 interview with Eric Blair of "The Blairing Out With Eric Blair Show", Paul Stanley was asked what the best part was of having Roth opening for KISS. Stanley said: "Well, Dave's got so many great songs. All the VAN HALEN catalog is terrific, and that's what he's doing. So, people get to hear all those great songs, and it was something that really appealed to us."

Simmons has repeatedly taken credit for "discovering" VAN HALEN and flying the band to New York to record a 15-song demo at Electric Lady Studios, with Gene at the production helm. But he ended up not working with the group after his KISS bandmates and manager, Bill Aucoin, expressed little interest in his demos. "I gave the demo back to the band, told them I had a tour to go on and afterward I would try to get them a record deal, but until then, I tore up our contract and set them free," he said. "It didn't take them long to get on Warner Bros."

In March 2020, Roth postponed the final six shows of his Las Vegas residency due to the coronavirus pandemic.

KISS's rescheduled "End Of The Road" dates run through October.