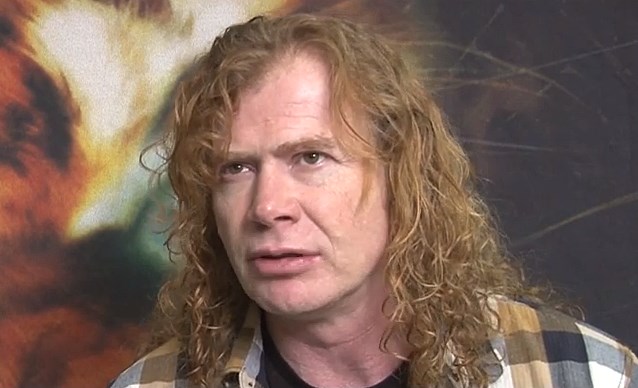 Alex Distefano of OC Weekly recently conducted an interview with MEGADETH mainman Dave Mustaine. A couple of excerpts from the chat follow below.

OC Weekly: With such an immense catalog of songs to choose from, how do you go about preparing your set lists for when you tour?

Mustaine: Well, sometimes we'll do it where we'll play a set list based on who we're playing with, other times base it on where we're playing. You never know which way it's going to be it can be one way or another. Then there have been times when we thought a set list was going to be good for a tour but we changed it. Sometimes we'll go to certain cities in one city we get an hour, another we'll have 70 minutes, and you're always changing it up. You gotta just be flexible, especially when you have over 200 songs. We're loving life as a band right now, touring a lot. We're going to try our best to entertain everyone when we come to your town.

OC Weekly: What have been some of your biggest joys in your career with MEGADETH over the years?

Mustaine: Playing with the band, it's so hard to say there have been so many. The first gold record, when one went double platinum. Playing all these successful tours all these years over the world. It's been beyond remarkable. Playing with DIO, MERCYFUL FATE and ALICE COOPER way back in the day, and even today many great bands; the Big Four, MOTÖRHEAD, [BLACK] SABBATH, [IRON] MAIDEN, all of it just never ends. Being a New York Times best-selling author when I flunked high-school English. I mean, it just shows you the irony of the world. You really can do anything if you put your mind to it.

OC Weekly: Without getting too political, how do current events influence your lyrics and music with MEGADETH?

Mustaine: Well given the mercurial headlines that are showing up now every single day, whether it's our government or our interactions with other governments, there's a lot of crazy stuff going on right now all over the world. If I chose to go down that path, I have a lot I could say. But at the end of the day, I am very optimistic. I can turn the worst situation into something good. I think a lot of people misinterpret why I even say anything when it comes to this. I's not about what's wrong with stuff, I want stuff to be right, and I'm willing to help make things right. That's why I did the DNC for MTV. But you have these fools saying I'm Republican, which is wrong. I'm an Independent person, I voted for both Democrats and Republican in the past. The point is, I vote.