DANZIG has announced a month-long North American headlining tour, set to begin in July in Pomona, California and end on July 31 in Las Vegas, Nevada. Support on the trek will reportedly come from PENNYWISE and CANCER BATS.

DANZIG has decided to insure that loyal fans are getting the first opportunity to buy tickets. For these shows, tickets will be offered before they go on sale to the general public. Tickets will have reduced service charges compared to the usual ticket outlets.

Pre-sales for the above-listed shows are available at this location.

The new studio album from Glenn Danzig's namesake band is set for a fall 2015 release, and his long-awaited covers effort is due later this year. He is also working on an EP of Elvis Presley covers.

DANZIG's cover version of the the classic Lee Hazelwood/Nancy Sinatra song "Some Velvet Morning", featuring a guest appearance by Cherie Currie (THE RUNAWAYS), was made available for streaming in 2014. The track was supposed to appear on Danzig's covers album, which was also due to include Glenn's renditions of classic songs from BLACK SABBATH, ELVIS PRESLEY and ZZ TOP, among others.

The first new DANZIG studio album in six years, "Deth Red Sabaoth", sold 11,700 copies in the United States in its first week of release to land at position No. 35 on The Billboard 200 chart.

"Deth Red Sabaoth" was released on June 22, 2010 via Evilive/The End Records. Produced by Glenn, the CD was recorded in Los Angeles over the course of 2009. 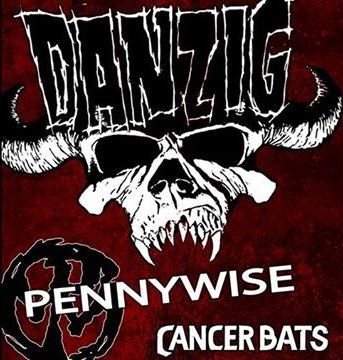