It's long been clear that the Canadian hard rock trio DANKO JONES lives and breathes — and even sweats and bleeds — rock n' roll. The group's namesake front man loves to talk about it (check out his long-running "The Official Danko Jones Podcast" for proof); he loves to write about it (as his new book, "I've Got Something To Say: 10 Years Of Rock And Roll Ramblings", pointedly captures); and he loves to sing about it, as evidenced by a number of the group's best-loved songs ("I Gotta Rock", "Rock Shit Hot", "Do You Wanna Rock", etc.).

On the group's new album, the aptly titled "A Rock Supreme", Danko Jones — the man and the band — ups the ante considerably from the moment the very first words blast from the speakers: "I'm in a band, and I love it / All I want to do is play my guitar and rock and roll." There's no midlife crisis here, no softening with age, no signs of self-doubt — just 11 fist-pumping (literally, in the case of "Fists Up High") jolts of sonic adrenaline with nary a ballad in sight.

"'A Rock Supreme' is the name of our new studio album. There are 11 songs on it, and they're all fantastic," says Jones. "Trust me — we know what we're doing when it comes to hard rock."

Produced by GGGarth Richardson (RAGE AGAINST THE MACHINE, RED HOT CHILI PEPPERS, RISE AGAINST, BIFFY CLYRO) and featuring cover artwork by Ulf Lunden (GRAVEYARD, EUROPE, BOMBUS), "A Rock Supreme" — which is available now for pre-order — will be released on April 26 via M-Theory Audio (U.S.), Rise Above (UK), Indica (Canada, AU, NZ) and AFM (rest of the world). All digital pre-orders include three instant downloads — the previously released singles "We're Crazy" and "Burn In Hell", and the newly released "Dance Dance Dance", which can now be streamed on Spotify, Apple Music, YouTube and other digital platforms.

A music video for "Dance Dance Dance" — which premiered on Wednesday on Los Angeles's iconic KLOS during a live appearance on "Jonesy's Jukebox" with host Steve Jones (SEX PISTOLS) — will premiere early next month, when the band will hit the road in the Western United States for a two-week headlining tour with support from the like-minded hard rock group NASHVILLE PUSSY and recent European tour mates PRIMA DONNA.

DANKO JONES — whose namesake frontman contributed guest vocals to VOLBEAT's 2017 #1 Active Rock hit "Black Rose", a song he performed live with the group at their stadium show in Denmark (a show that was released as the DVD/Blu-ray "Let's Boogie! Live From Telia Parken") — has made a name for itself over the years as a must-see live band during memorable tours with the likes of GUNS N' ROSES, MOTÖRHEAD and CLUTCH.

The group's last album, 2017's "Wild Cat", cracked the sales charts in Canada and eight European territories, achieving the group's highest chart positions yet in Germany, France, Belgium and Switzerland. Upon its release, lead single "My Little RNR" became one of the fastest-streaming songs of the band's career and has since become a live staple.

Over the years, DANKO JONES has earned extensive praise for its visceral live shows and attitudinal, libidinous rock. The group's best-known material includes "Had Enough", which earned the group their first gold and platinum singles in Sweden and has racked up more than 13 million Spotify streams; "Gonna Be A Fight Tonight", which WWE used as the official theme song of the 2015 Royal Rumble; and "Lovercall", its first of seven singles to crack the U.S. Active Rock Top 40. 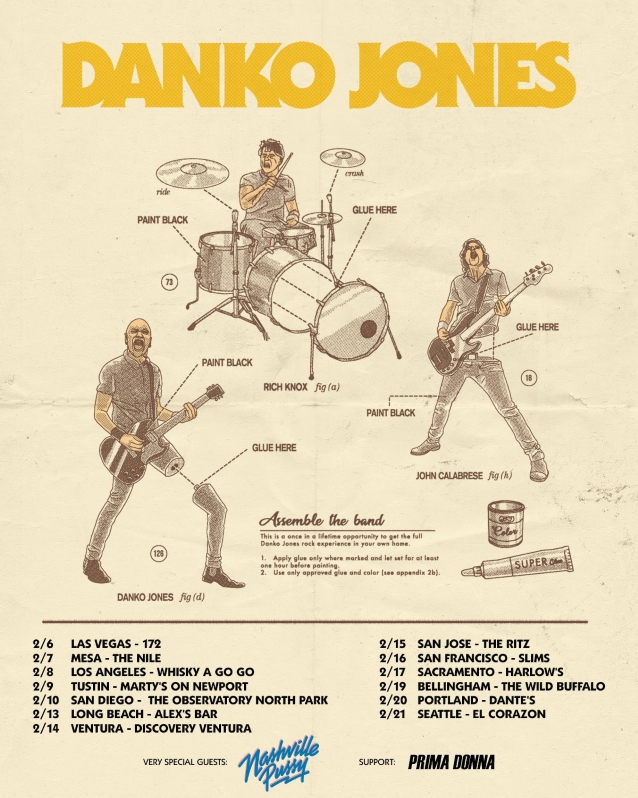