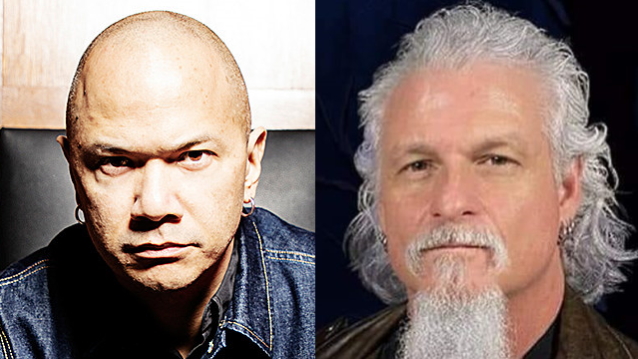 On Friday (March 19), U.S. Magistrate Judge Zia Faruqui ordered Schaffer held without bail on six federal criminal charges related to his alleged involvement with the January 6 insurrection at the U.S. Capitol. He ruled that while Schaffer wasn't a flight risk, he does pose a danger to the community. Schaffer's attorney argued his client's comments were taken out of context, and that he knows he used bad judgment on January 6 and wishes he had a "do-over."

Earlier today (Sunday, March 21), Danko tweeted out a link to a NME article about Friday's hearing, and he included the following message: "Jon Schaffer used bad judgement because he's a white nationalist piece of dog dung. His band mates cheered him on because ICED EARTH are a terrible band. His request for a 'do-over' proves his pathetic weakness. He's the dictionary definition of a bell-end." The Canadian rocker, who is the frontman of his namesake trio, added in a separate tweet: "Only those that cosplay at being Alpha want 'do-overs'. Jon Schaffer and @_IcedEarth are a FAKE band."

On January 6, then-ICED EARTH vocalist Stu Block appeared to take pleasure in the grim images out of Washington during the pro-Donald Trump riot on Capitol Hill, writing in a since-deleted post on his Facebook page: "Oh it's happening! History in the making. Sending love to my friends in the US and all over the world!" He later apologized for his post, saying that his "wording was absolutely misunderstood and not properly thought out on my part." A month later, Block and ICED EARTH bassist Luke Appleton announced their departures from the band.

A short time after Friday's hearing, Schaffer's attorney filed a "motion to amend detention order," claiming that "the government failed to establish Mr. Schaffer's dangerous to the community by clear and convincing evidence."

Victor wrote: "Mr. Schaffer is 53 years old. He has no criminal convictions. He does not have a substance abuse or mental health issue. He has no history of violence and was not violent on January 6, 2021. He entered the capitol with pepper spray. He did not threaten anyone with or discharge the spray. He left the capitol after approximately sixty seconds and returned home to Indiana."

During Friday's hearing, government lawyers presented exhibits consisting of a video interview Schaffer gave in November 2020 at a pro-Donald Trump rally expressing his political views and a video and still photos taken on January 6, showing him inside the U.S. Capitol holding "bear spray."

According to WUSA9, the judge cited Schaffer's comments in the video interview that "if somebody wants to bring violence, I think there's a lot of us here that are ready for it."

Schaffer's attorney argued the musician was not responsible for the insurrection and was encouraged by former president Donald Trump.

"People have the right to believe the highest elected official," Victor said, according to Indiana Public Media. "My client is not responsible for what happened on January 6."

Schaffer's attorney admitted Schaffer "used bad judgment that day" by bringing "bear spray" into the Capitol, but insisted he was only intending to use it for protection.

Schaffer will appear in a status hearing next month.

Last month, a man resembling Schaffer was seen in security footage from the U.S. Capitol riot that the House impeachment managers obtained and submitted as evidence for former President Donald Trump's second impeachment trial. The clip in question, which was released by CNN on February 15, showed rioters charging through a breached entrance and engaging and pushing officers. Schaffer could be seen near the front of the mob, wearing a blue hooded sweatshirt, a tactical vest and black leather fingerless tactical gloves, and pointing his finger while yelling at the officers.

Schaffer was held in the Marion County Jail for nearly two months after surrendering to police on January 17. He made his first court appearance the following day.

More than 250 criminal cases have been filed so far. Charges include unauthorized access, theft, damage to government property and assault on law enforcement officers.

Jon Schaffer used bad judgement because he’s a white nationalist piece of dog dung.
His band mates cheered him on because Iced Earth are a terrible band.
His request for a “do-over” proves his pathetic weakness.
He’s the dictionary definition of a bell-end. https://t.co/SxJdCV4UHg

Only those that cosplay at being Alpha want “do-overs”.

Yeah but not before members like their singer posted their support of the white nationalist insurrection on FB and then later took it down. Here is the receipt... pic.twitter.com/gD0dbEibOZ