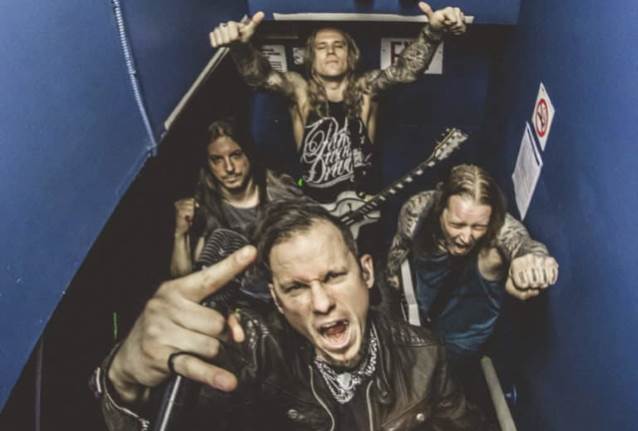 Jake E has confirmed to YesterdazeNews magazine that CYHRA is planning to enter the studio later this year to begin recording the follow-up to last year's debut album, "Letters To Myself".

"It's really exciting and scary at the same time," the vocalist said (see video below). "I think we will do a continuation of what we did on [the first] album. And what we learned from touring, what you keep learning on tour, is how did your songs work in front of a live audience? And some of the songs that we did for 'Letters To Myself', [they are] amazing songs, but they don't have that thing that needs to be in a live set. And that's something that we felt [was] a little bit tricky, because there's one or two songs on the album that doesn't really work live. Maybe they're too similar, maybe they're too slow. In a live set, you always need to think about the tempo — you go up, you go down a little bit, go up and then you hit the climax at the end of the show. So that's what we're working on a little bit more — to make the songs a little bit more live-friendly. But music-wise, lyrics-wise, it's gonna be… you know, the hooky parts. You're gonna know that it's CYHRA when you listen to it."

Jake also addressed the recent departure of former IN FLAMES bassist Peter Iwers, who appeared on "Letters To Myself" and performed with CYHRA at the band's first couple of shows.

"To begin with, it's really, really sorry that we can't have Peter any longer," Jake said. "We love the guy, and he's a fantastic human being in every aspect. The problem with Peter was that he's having so much things — he has his hands in everything; he has a bar, he has a brewing company, he has a big family — and it was hard for us to actually have someone that, 'Okay, I can't do the U.S. tour, but I can do the show after. But then I can't do that…' You know, it didn't really work. And now when we don't play with a bass player — we have him on backing tracks — Peter is still with us on the live shows, but he's not there in person. We actually felt that it works pretty good. As it looks like right now, we're not gonna search for a replacement; we're gonna continue as a quartet… In a perfect world, we would love to have Peter with us, but we can't go on tours having the fans [go], 'Oh, maybe he's there. Maybe he's not there.'"

CYHRA recently released the official music video for "Here To Save You", taken from "Letters To Myself", released last October via Spinefarm Records. The clip was filmed during CYHRA's successful North American tour opening for SABATON and KREATOR this past spring.

CYHRA made its live debut last October at Nosturi in Helsinki, Finland.