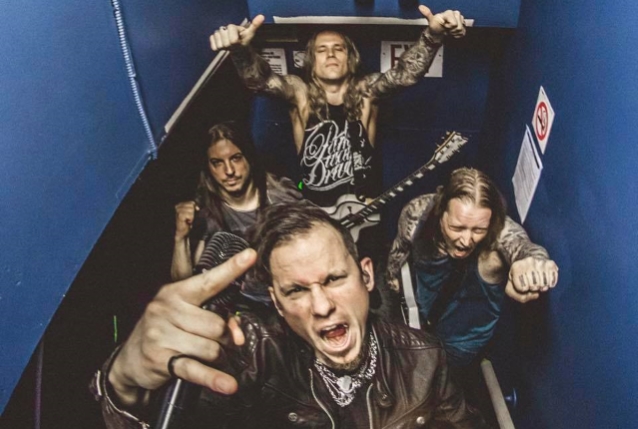 CYHRA has entered Hansen studios in Ribe, Denmark to begin recording its sophomore album. The follow-up to 2017's "Letters To Myself" will tentatively arrive in early 2019 via Spinefarm Records.

In a recent interview with Metal Casino (see video below), Jake stated about the songwriting process for CYHRA's upcoming album: "When we wrote the first songs [for the debut album], we were just sitting, jamming around, and we had no plans — we had no expectations from fans or labels or anything like that — and now we have. We've been touring a lot — we've been playing a lot of shows — and now we realize that, 'Oh, the new songs, we might have to think a little bit more about how are these songs gonna work out live.' So we continue the same road with this album as the last one — it's a natural progression, music-wise — but we've been putting a little bit more effort into having the songs work out in the live set."

Asked about the inspiration for the lyrics on the second CYHRA album, Jake said: "I haven't been writing anything. We've been discussing a lot. But it was the same thing with the first album — we had tons and tons and tons of ideas and we wrote shitloads of lyrics, but it was not until the final stages, when you are in the studio, when you feel the vibe, that, 'Okay, now we know what to write.' It just falls down like this, and you know: 'Okay, now we're ready.' As the music is a natural progression, the lyrics are gonna be that as well. But I can probably say it's still gonna be personal, but maybe it doesn't have to be all about feeling bad or stuff like that, but it's still gonna have a personal touch."