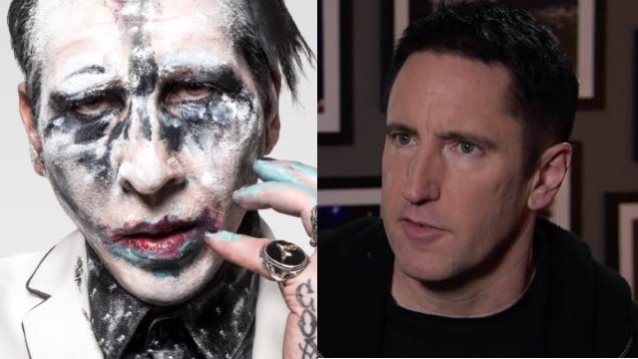 According to The Pulse Of Radio, Marilyn Manson said in a new interview with Apple Music that he and NINE INCH NAILS mainman Trent Reznor are on good terms again and that the possibility of the two musicians collaborating is not too far-fetched. Speaking with Zane Lowe of Beats 1, Manson said that the recent HBO documentary "The Defiant Ones", which deals in part with Interscope Records — home at one time to both Manson and Reznor — got him thinking about his on-again, off-again frenemy.

Manson explained: "I liked 'Defiant Ones', because it also made me think about Trent, it made me reach out to him. He's the one who actually sent me an e-mail... He said something in the e-mail along the lines of, 'It really pisses me off that music isn't dangerous anymore. It reminds me of how great you were, and I was, and that era.' NINE INCH NAILS was obviously huge to me, and to meet and interview Trent Reznor, and have him sign me, had a big impact on my life."

Manson added: "All of the past, any sort of squabbles or arguments, that just went away."

Saying that he "absolutely" would like to collaborate with Reznor again, Manson continued: "We're playing a show with them, it's two nights in a row. We've been speaking about things, I don't know what will happen, I would love to. He taught me how to do a lot of things."

Reznor signed Manson to his Nothing Records label in 1993 and produced or co-produced the act's first two full-length albums as well as the "Smells Like Children" EP, giving the Manson band its commercial breakthrough.

The two feuded throughout later years however, occasionally patching things up for a brief period before falling out again.

At one point when they were on good terms, Manson explained that he wasn't solely to blame for the beef. "I think that's a great misconception because my side of the argument was more public because I was on tour, I wrote a book, and things like that," he said. "That's not to say that it wasn't equally distributed between the two of us. And that was part of us becoming friends again was putting the past behind us and admitting that we both were wrong."

Manson recently revealed that his tenth studio album, "Heaven Upside Down", will be released on October 6 after Manson originally wanted it out last February. The first single is called "We Know Where You Fucking Live".

The singer will kick off a North American tour on September 27 in Silver Spring, Maryland.