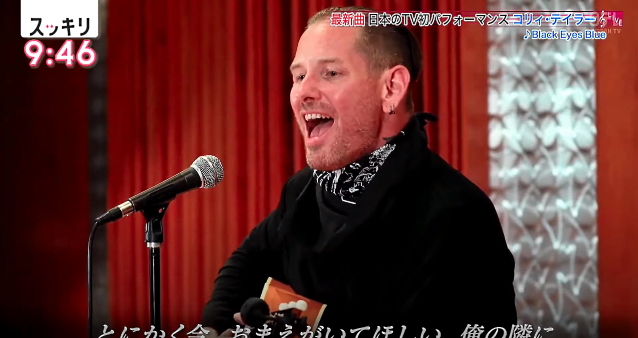 SLIPKNOT and STONE SOUR frontman Corey Taylor recently performed an acoustic version of one of his two new solo singles, "Black Eyes Blue", for Japanese TV. Video footage of the performance can be seen below.

"Black Eyes Blue" is taken from Taylor's debut solo album, "CMFT", which will be released on October 2 via Roadrunner Records. Taylor recorded the effort with his band consisting of Jason Christopher on bass, Dustin Schoenhofer on drums, and Zach Throne and Christian Martucci (STONE SOUR) on guitar. The LP was completed at Kevin Churko's The Hideout Recording Studio in Las Vegas with producer Jay Ruston, who has previously worked with ANTHRAX, STEEL PANTHER and STONE SOUR, among others.

"I love what I've done in the past, I love the projects that I've been attached to, but this, honestly, was probably the most enjoyable album that I've done since the first SLIPKNOT album," Corey told Kerrang! magazine. "There was such a sense of, 'We're doing it together.' I hadn't felt anything like that for a really long time, man. People grow apart, relationships become fractious… people stop liking each other sometimes, in certain bands, you know? But with this, it was totally different, because we were all friends before that. We just happened to all play together, and then we formed a band around that friendship, and it all really galvanized it.

"This has definitely made me appreciate making music again, let's put it that way," he added.

On "Black Eyes Blue", Taylor's vocals soar with nostalgia, while on the other new single, "CMFT Must Be Stopped", his rhymes recall his work on SLIPKNOT's debut record and run alongside bulletproof bars from multi-platinum artist Tech N9ne and U.K. MC Kid Bookie. The track is joined by a Djay Brawner-directed music video, which sees Taylor taking the CMFT championship belt as friends such as Marilyn Manson, Lars Ulrich, Rob Halford, Chris Jericho, ZillaKami and more making cameos.

"I was talking to my wife about this the other day — I was, like, 'Fuck! There's nobody for me to hide behind!'" Corey told Kerrang! "It's easy to take risks when you have the benefit of a well-established name — and by that, I mean the bands that I've been in for 20 years. But I also feel like I've earned the right to put something out there and throw people for a loop — not only with the things that I've done with both bands, but the guest spots that I've done with several bands: everybody from TONIGHT ALIVE to Zakk Wylde to Tech N9ne. I mean, I've really spread out, in a cool way. I've never sequestered myself to one corner of the genre; I've never allowed myself to be painted into a corner. And I think because of that, people's minds are a lot more open when they hear that I'm putting something out. They're gonna come into it with this mindset of, 'Okay, I don't know what the fuck I'm about to hear. This should be interesting. I think by doing that, that really sets the tone for your career."

Taylor previously worked with Tech N9ne on a song called "Wither" in 2015, and with Kid Bookie on a reworked version of the rapper's track "Stuck In My Ways" last year.