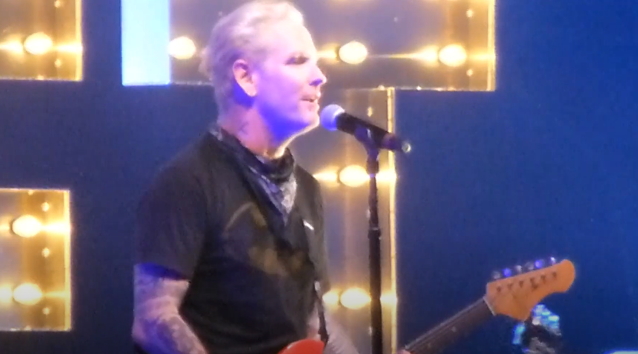 SLIPKNOT and STONE SOUR frontman Corey Taylor kicked off his solo tour, "CMFTour 2021" Monday night (May 17) at the Marquee Theater in Tempe, Arizona. As expected, Taylor and his band ran through anthems from his critically acclaimed solo debut "CMFT", choice cuts from his SLIPKNOT and STONE SOUR catalogs, and various covers and surprises. Fan-filmed video footage of the performance can be seen below.

Taylor decided to launch this tour for a few significant and personal reasons. As always, he endeavors to deliver an unforgettable show for fans, but just as importantly, he recognizes the massive impact that the ongoing global pandemic has had on live music venues and touring crews alike. It upholds his staunch commitment to supporting live music and the industry surrounding it as illustrated last year through his popular eBay guitar auction, which raised $150,000 for COVID-19 relief, and his COVID-19 safe secret L.A. show benefiting Sweet Relief Musicians Fund — a 501(c)(3) non-profit healing musicians and music industry workers in need.

"It's the full shebang," Taylor told Rolling Stone about the tour. "The CHERRY BOMBS are gonna do their show, with fire and aerial and rock and all the good stuff, then me and the boys will get up and play for, like, two hours."

Regarding how the idea for the tour came about, Taylor said: "We'd been looking for opportunities to play here and there constantly, but it wasn't until a promoter friend of ours asked us how we would approach a tour with the kinds of safeguards we were interested in that we realized we could put a tour together. We'll be taking as many precautions as we can: the usual social distancing, pod seating (sectioned off area with an allotted number of people who came together allowed inside), temperature checks, waivers signed at the door, masks in place everywhere but your pod, etc. We're encouraging everyone to get vaccinated as well before the tour."

Taylor recently made history as he reached No. 1 at Active Rock Radio with his powerful single "Black Eyes Blue". The achievement put Taylor in a class all his own, making him the first artist in the history of the format to reach No. 1 with three separate projects, following chart-topping efforts from SLIPKNOT and STONE SOUR.

"CMFT" made impressive debuts on charts around the world in October, entering at No. 1 on Billboard's Current Hard Rock Albums chart, while claiming No. 2 on Current Rock Albums, No. 6 on Vinyl Albums, and No. 9 on the Top Albums charts. Furthermore, "CMFT" landed Top 10 on the official album charts in Australia, Germany, Switzerland and Austria, with Top 20 debuts in the United Kingdom, Finland and Japan (international chart).

Featured in Rolling Stone's "Fall Album Preview 2020," "CMFT" has been garnering widespread critical applause, with Forbes affirming, "Corey Taylor's singing is undeniably the best it's ever been. From SLIPKNOT's last album to his new solo material, Taylor is easily among the best sounding rock singers alive." Kerrang! raved, "Corey Taylor certainly couldn't have predicted how important a sense of uninhibited joy would be on his debut solo effort, it's just what 2020 needs — and, even more importantly, exactly what he delivers." The Daily Beast attested, "'CMFT' finds the singer broadening his horizons and showing off his considerable versatility," while Stereogum noted, "Corey Taylor's lived several lives in the span that it takes most of us to push through just one, and it's clear that he cherishes every experience he's had so far." New York magazine added that "CMFT" "bridges his vast tastes and influences, dabbling in punk rock, metal, reflective acoustic tunes, plaintive piano ballads, and hip-hop, with Taylor's power-house vocals and introspective lyrics acting as a guide."

"CMFT" is highlighted by the singles "Culture Head", "HWY 666", "CMFT Must Be Stopped" (featuring Tech N9ne and Kid Bookie), and the Active Rock radio hit "Black Eyes Blue". Taylor also hit No. 1 on Billboard's Hard Rock Songwriters chart following the unprecedented debut of "Black Eyes Blue" and "CMFT Must Be Stopped", the latter of which has racked up more than four million YouTube views for its star-studded music video. Furthermore, Taylor debuted the pummeling "Culture Head" during WWE's NXT broadcast on the USA network, illuminating yet another facet of "CMFT" and showcasing the broad spectrum of this fiery and fearless rock 'n' roll opus, as Taylor touches on lifelong influences ranging from hard rock to classic rock, punk rock to hip-hop. 14-time world champion and EVP of global talent strategy and development at WWE, Triple H, also shared a WWE exclusive performance of Taylor and his band tearing through the MOTÖRHEAD classic "Ace Of Spades".

"CMFT" has been a long time coming for Taylor, with newly written tracks alongside some dating back to his teens. Recorded at The Hideout Recording Studio in Las Vegas with producer Jay Ruston and his band — Christian Martucci (guitar), Zach Throne (guitar), Jason Christopher (bass), and Dustin Schoenhofer (drums) — the album traces a wild and exhilarating roadmap through Taylor's musical psyche. 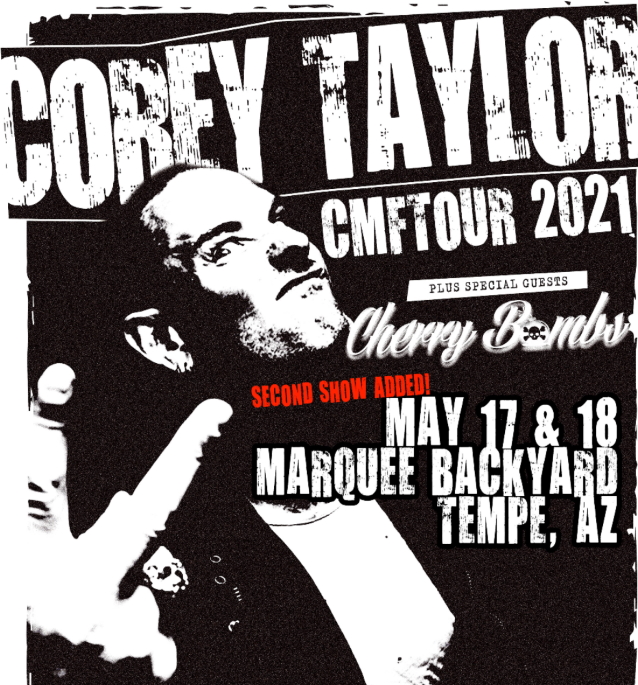