COAL CHAMBER and FEAR FACTORY will join forces for a North American tour this summer. Support on the trek will come from DEVIL YOU KNOW (select dates), JASTA (select dates), SAINT RIDLEY and MADLIFE (all dates). The tour kicks off July 24 in Tucson, Arizona and will wrap up on August 22 in Santa Ana, California.

COAL CHAMBER is offering VIP packages for every date on the tour. The VIP package includes a meet-and-greet with the band, exclusive t-shirt, exclusive poster, souvenir laminate and early entry (where applicable).

Says COAL CHAMBER singer Dez Fafara: "COAL CHAMBER is coming to the USA for another killer tour, this time bringing along some great friends FEAR FACTORY who have a new record coming and my good buddy [Jamey] Jasta with his solo project! Get ready and get your tickets because this tour is gonna sell out and be a good time."

COAL CHAMBER's comeback album, "Rivals, is being released today (Tuesday, May 19) in North America via Napalm. The band's first CD in over thirteen years was recorded in part at Audiohammer studio in Sanford, Florida with producer Mark Lewis (DEVILDRIVER, CANNIBAL CORPSE).

FEAR FACTORY is putting the finishing touches on the follow-up to 2012's "The Industrialist" for a late 2015 release via Nuclear Blast Entertainment. 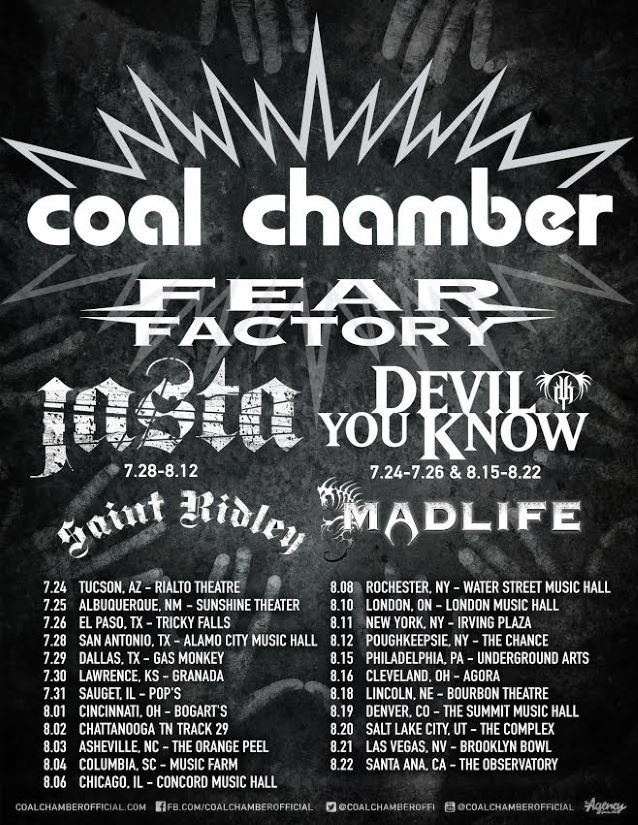