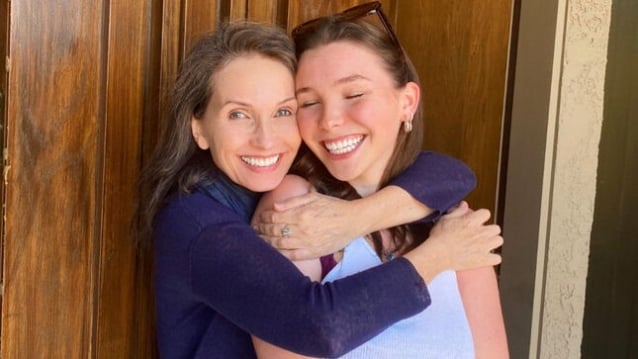 For the finale of the award winning and critically acclaimed IGTV series and podcast "Mind Wide Open", Lily Cornell Silver welcomes her mother, music manager Susan Silver, for a powerful and introspective talk about the relationship between a parent and child, the connection between addiction and mental health, anxiety, the benefits of therapy and their own journey with wellness. This first anniversary of the launch of "Mind Wide Open" is on the 57th birthday of Lily's late father, Chris Cornell (SOUNDGARDEN, AUDIOSLAVE).

While the series launched in honor of her dad, her mom Susan served as, in Lily's words, a "catalyst" and mentor for the launch of "Mind Wide Open".

During the touching and poignant final episode, Susan and Lily discussed the life experiences that led Susan to bring Lily into the world. They also delved into their close bond, their home life and specifically how Susan set the stage for Lily's openness around mental health and how they continue to approach it today.

Susan said: "What I learned, probably just in the years before you were born, was that selfcare is not self indulgence. It's so important that we take responsibility for ourselves individually so we can help take care of the collective. She continued: "Movement and dance... for the last 25 years, helps me physically feel better but lifts me emotionally in a profound way. I got lucky enough to get introduced to TM (transcendental meditation) when I was in high school so that was really important... Therapy has been really valuable for me and getting out in nature... those are the pillars for me. Having a spiritual practice… really important for me. It has been for decades and decades."

Susan also reflected on the people in her own life who struggled with mental health challenges and how addiction was a result of self-medicating. "By the time you were born, I had dealt with a lot of people who had substance abuse and addiction and there had been a fair amount of losses," she said. "And the losses, of course, have a profound impact. I was in my early 40s when I had you so I had a lot of life experience to look back on. I had participated in a lot of programs with people in different rehabs, I would go as a supportive family member or spouse or in a professional capacity with clients. And certainly, I learned that there's something underneath the addiction component and the conversation about mental health started to become more and more prevalent."

Regarding her approach to being a mom, Susan explained that the loss of her brother made her re-examine her life. "Your dad and I always wanted to bring a family into the world and we were so busy with our careers," she said. "But it was the heart-shattering loss of my little brother that made me stop and really look at bringing you into the world, first and foremost. And... really think about 'how did I want that to be for you?' What did I want for you that I didn't have in my growing up."

Closing out the final episode of "Mind Wide Open", Susan praised Lily and her generation, calling them "amazing warriors" and retains hope the world will be in good hands as they start their journey into adulthood.

Lily reflected on one of the many things she has learned through the past year of "Mind Wide Open", "the importance of listening to oneself, and that it's okay to ask for help."

Lily has been recognized and received high praise and awards from NAMI NY, NAMI Seattle, Navos and others since she began "Mind Wide Open". With the finale of the series, Lily will focus on finishing college, as well as continuing as an ambassador for the QUILT app where she hosts a popular weekly discussion. She has recently joined Lemonada as an executive producer with a focus on creating stories about mental health.

"Mind Wide Open" gets to the finish line having been featured in Rolling Stone, Alternative Press, Maria Shriver's Sunday Paper, Variety, NME, ET, and the Seattle Times, among many, many others.

"Mind Wide Open" may come back for special episodes but can still be heard as a podcast on Spotify and Apple and on YouTube with subtitles available in Spanish and English.