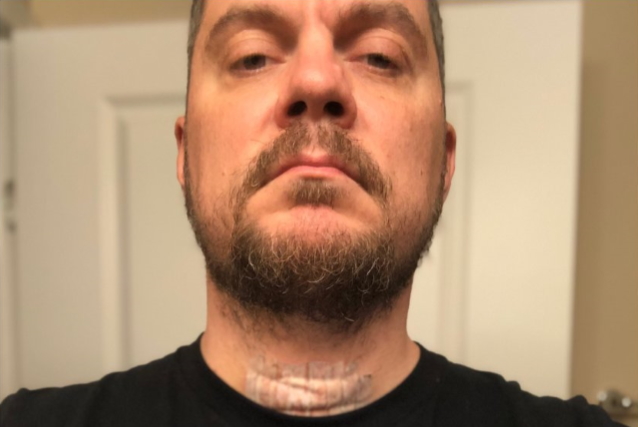 CHIMAIRA singer Mark Hunter has been diagnosed with thyroid cancer.

He wrote: "Hello friends. There's no easy way to say it. I have thyroid cancer.

"Last year during a physical, my doctor discovered a large mass in my neck. I had two fine needle biopsies, but the results were inconclusive.

"A week ago, I had half of my thyroid removed so doctors could better test the tumor. The results were positive for apillary cancer- the most common of thyroid cancers. Luckily, it also has a high cure rate. There is no known cause for this type of cancer, but it's likely genetic. There weren't any symptoms either.

"The next step is to remove the rest of my thyroid on August 12th and explore radioactive iodine treatment. I should probably sit on a beach somewhere after that.

"I'm grateful for my team of doctors at the Cleveland Clinic, my supportive friends and family, and for Lauren and her ability to help me out of the depressive dark hole the news caused me to go down. My mother is also an inspiration for having beat colon cancer, as are many of my friends and fans who've endured much worse.

"You guys and gals are my extended family, and I'm thankful to have you by my side after all these years. I truly appreciate it. My hope is this inspires you to stay on top of your health. A routine physical could save your life.

"In the meantime, I am going to stay busy on work-related projects while enjoying the rest of my summer. I'll continue to keep my mind busy immersed in my hobbies shall it start to wander toward the dark side.

"Leaving you with my favorite quote from Nietzsche (and Conan the Barbarian) that I used as lyrics for 'Resurrection': 'That which does not kill us makes us stronger.'"

Last year, Hunter was the subject of a short film about his ability to cope with mental illness. "Down Again", which also documents CHIMAIRA's rise and fall, was made available in October as a free download.

Formed in 1998, CHIMAIRA was Ohio's great contribution to the New Wave Of American Heavy Metal, the same musical movement that produced LAMB OF GOD and UNEARTH, among others.

CHIMAIRA split up in 2014, one year after releasing its seventh studio album, "Crown Of Phantoms".

The band reunited in December 2017 for a one-off concert at the Agora Theater in Cleveland, Ohio.

Hello friends.
There's no easy way to say it. I have thyroid cancer.

Last year during a physical, my doctor...