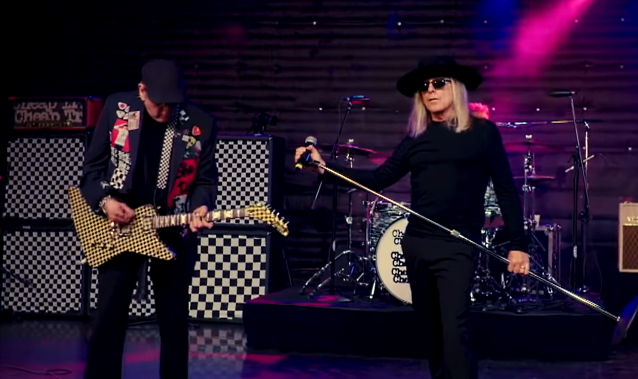 CHEAP TRICK's 20th studio album is out today, featuring the raucous "Light Up The Fire" and the blistering "Boys & Girls & Rock N Roll", the latter of which the band performed on "The Late Show With Stephen Colbert" last night. "In Another World", out digitally and on CD today via BMG, will be released physically on standard black vinyl on June 4. Limited-edition blue-and-white splattered vinyl will be available at independent record stores nationwide. In addition, a limited-edition picture disc will be available exclusively via Target.

The reaction to "In Another World" has been stellar at the DSPs. Currently in the #2 spot on the "Classic Rock Now" playlist, the album is also being featured on "Rock the World!," "All New Rock" and "Most Wanted Rock." At Apple Music, the band is being highlighted on the "Hard Rock Best New Songs," "Hard Rock Artists We Love" and the "New in Rock" playlists.

Produced by longtime associate Julian Raymond, "In Another World" sees CHEAP TRICK doing what they do better than anyone — crafting indelible rock 'n' roll with oversized hooks, mischievous lyrics, and seemingly inexorable energy. Trademark anthems like the aforementioned "Light Up The Fire" and "Boys & Girls & Rock N Roll" are countered by more introspective — but no less exuberant — considerations of times past, present, and unknowable future on such strikingly potent new tracks as "Another World" and "I'll See You Again". "In Another World" — which marks CHEAP TRICK's first new LP since 2017's double-header of "We're All Alright!" and "Christmas Christmas" — further showcases CHEAP TRICK at their most eclectic, touching on a myriad of distinct sounds and song approaches, from the swampy Chicago blues number "Final Days" (featuring fiery harmonica from Grammy Award-nominated singer and WET WILLIE frontman Jimmy Hall) to a timely rendition of John Lennon's still-relevant "Gimme Some Truth", originally released for Record Store Day Black Friday 2019 and featuring the instantly recognizable guitar sound of erstwhile SEX PISTOLS guitarist Steve Jones. As irresistible and immediate as anything in their already awesome catalog, "In Another World" is CHEAP TRICK at their irrepressible best, infinitely entertaining and utterly unstoppable.

CHEAP TRICK is, of course, one of rock's hardest-working live acts, lighting it up at arenas, concert halls, and amphitheaters worldwide more than 150 nights each year. Alas, recent events have forced the band off the road for perhaps the longest hiatus of their storied history. CHEAP TRICK plans to return to the endless highway later as soon as they can, including North American and U.K. tour dates.

Tonight, iHeart Radio will host a CHEAP TRICK album-release party at 7 p.m. ET. Hosted by iHeartRadio's Jim Kerr, the event will feature an intimate conversation as well as an exclusive performance and needle drops. Fans can tune in to the video stream on iHeartRadio's YouTube and broadcast across iHeartRadio's classic rock stations.