The new CHASTAIN album "We Bleed Metal" will be released worldwide on November 6. It will be made available on CD and vinyl as well as all digital formats. Guitarist David T. Chastain states: "This is a continuation of the 'Surrender To No One' sound with, hopefully, some improvements all the way around. [Singer] Leather [Leone] has never sounded better and I believe this is my most shredtastic CHASTAIN lead guitar playing since 'The 7th Of Never' era." Drummer Stian Kristoffersen (PAGAN'S MIND) and bassist Mike Skimmerhorn return once again to complete the lineup.

The "We Bleed Metal" cover artwork can be seen below.

The CHASTAIN albums "Surrender To No One" and "We Bleed Metal" will be released in vinyl format later in the year on Pure Steel Records.

The CHASTAIN classic albums "The 7th Of Never" and "The Voice Of The Cult" were recently reissued on CD by Divebomb/Tribunal Records. These reissues were nicely redone with new mastering, packaging, interviews, old reviews and more.

The "uncut" version of CHASTAIN's comeback album, "Surrender To No One", was made available on digital format on Leviathan worldwide. 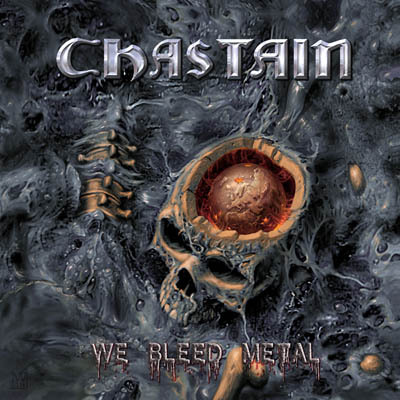