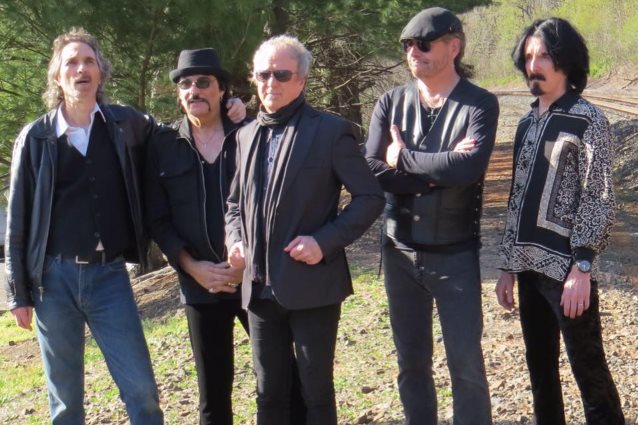 Coming off a very successful U.S. tour and the release of its first studio album in ten years, "Black Dawn", the time has come for founding member and world-renowned drummer Carmine Appice to re-energize and rebuild CACTUS, the band once heralded by critics as America's answer to LED ZEPPELIN.

Appice has announced two new members to the legendary band's lineup: bassist Jim Caputo and guitarist Paul Warren. Caputo replaces bassist Pete Bremy, who has left CACTUS to pursue other projects. Warren, best known as lead guitarist for Rod Stewart, Tina Turner and Joe Cocker, will be the band's new guitarist for touring, taking over for founding member Jim McCarty. McCarty, who remains a writing and recording member of CACTUS, is unable to tour with the band due to health reasons. Lead vocalist extraordinare Jimmy Kunes and harmonica wizard Randy Pratt, both of whom joined when the band re-grouped in 2006, remain in the lineup.

"Nearly five decades after I formed this band, the time has come to reinvent CACTUS once again," says Appice, who also still drums for VANILLA FUDGE, THE APPICE BROTHERS and THE PLATINUM ROCK ALL STARS. Adds Appice: "The music remains the same; CACTUS is still 'hot and sweaty,' and the quality of the band's musicianship is as strong as ever."

"I saw the original CACTUS live a few times, and they absolutely killed it," says Warren. "That was one of the great bands of the era, and they are still a great band, today. I am excited, and honored, to playwith such a historic band!”

Warren, who has his own successful solo band, is a native of Detroit who considers Jim McCarty one of his biggest musical influences. "Filling in for Jim McCarty will be a challenge. Not only is he a founding member, he is a brilliant guitarist — one of the best to ever come out of Detroit. Jimmy could never be replaced. I plan to honor, and pay homage to his work with CACTUS while still bringing some of my own 'Detroit attitude' to the legendary music of this band."

Caputo has worked in a myriad of national touring acts, including the Appice brothers' "Drum Wars" show, which includes both Carmine and his brother, Vinny.

After a few years of complete inactivity, CACTUS returned in 2016 with "Black Dawn", a new studio album and its first in almost seven years. Featuring the blistering riff-rock that the band built its reputation on, "Black Dawn" is classic CACTUS with a fresh new energy that the band has not had since its heyday in the early 1970s.

CACTUS has had a long and turbulent history. Formed in 1970 from the ashes of VANILLA FUDGE by Carmine Appice and Tim Bogert, the initial lineup also featured McCarty and vocalist Rusty Day. (Appice and Bogert had originally planned a new band with Jeff Beck which was put off until 1973, because of Beck's near-fatal car crash in 1969.) Jim McCarty had come from MITCH RYDER & THE DETROIT WHEELS and was playing with THE BUDDY MILES EXPRESS. Tim and Carmine also found vocalist Day in THE AMBOY DUKES with Ted Nugent. Together, the four musicians formed CACTUS, named after the peyote cactus, which provided a key ingredient in mind-altering drugs.

While CACTUS saw success from the start and soon built a loyal fan base, by early 1973, the band had collapsed mainly due to lack of real support from its label, and the fact that Beck was now ready play with Carmine and Tim. It would not be until 2006, three decades after the tragic death of Rusty Day, that the group reformed with Pratt and Kunes. When Tim Bogert was forced into retirement after a serious motorcycle accident, Pete Bremy jumped in both in CACTUS and VANILLA FUDGE.