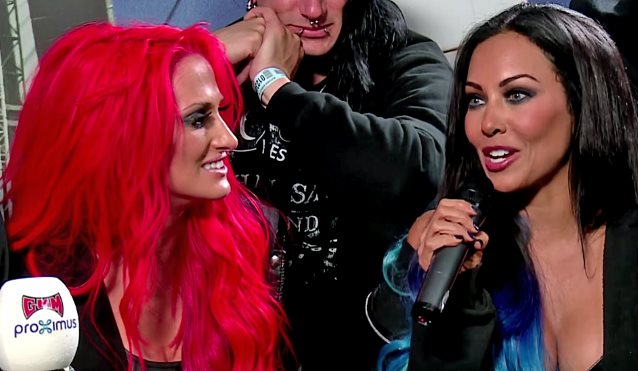 BUTCHER BABIES were interviewed at the Graspop Metal Meeting on June 19 in Dessel, Belgum. You can now watch the chat below.

Speaking about their "hidden talents," BUTCHER BABIES singer Carla Harvey said: "I'm an artist. I write comic books. And I wrote a novel. And I was also a mortician. I did [the mortuary stuff] for a while, and I really loved it; it helped changed my life, it wasa big part of my life. But entertainment is where I belong. I started in entertainment when I moved to L.A. I took a break to be a mortician. My heart is in my music; it always has been, since I was a kid. And I think all of us belong in what we're doing right now, which is on a stage performing."

Added BUTCHER BABIES co-vocalist Heidi Shepherd: "I do the stock market. I mean, I'm working towards being amazing on it. Bt, yeah, I have a really good mentor, and I'm working at it, and it's really fun. I love it. And I was a radio DJ for a really long time. And I competed in the Junion Olympics. I'm an athlete. And to me, that shaped my work ethic for even the band."

BUTCHER BABIES' sophomore album, "Take It Like A Man", will be released on August 21 via Century Media. The CD was produced by Logan Mader, who has previously worked with FIVE FINGER DEATH PUNCH, DEVILDRIVER, CAVALERA CONSPIRACY and GOJIRA.

BUTCHER BABIES will join GWAR and BATTLECROSS across North America from August 25 to September 18.