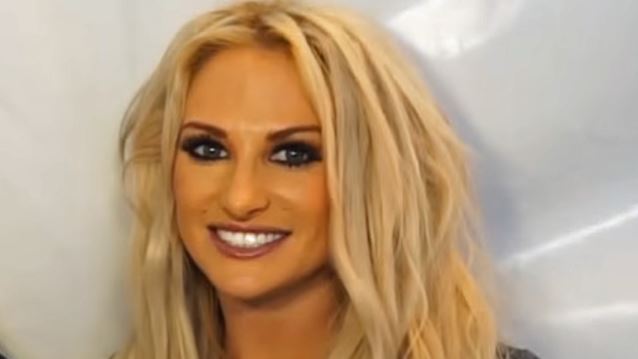 Hales of the Columbus, Ohio radio station 99.7 The Blitz conducted an interview with BUTCHER BABIES frontwoman Heidi Shepherd at this year's Rock On The Range festival, which was held May 20-22 in Columbus, Ohio. You can now listen to the chat using the SoundCloud widget below.

Asked what adive she has for female rockers trying to break into the music industry, Heidi said: "Just do it. The thing is, so many people will try and tell you no.

"I worked in a male-dominated industry [before]; I was a radio DJ for seven years. You know how it is… male-dominated. It's very difficult to kind of push your way through that. And I found it's the same way in the metal and rock community as well. And people will try and tell you, 'No.' 'No, no, no. You shouldn't do this.' No. Screw that! You should do that. You do whatever you want to do, and you go in there and you make some noise. And that's what's important — to make some noise. Do something different. Do something exciting. I mean, there are so many bands nowadays ripping each other off. It's, like, the cookie-cutter way of doing music."

She continued: "Do what you wanna do; create your own path. And I think that that has been something that's worked for BUTCHER BABIES — we've created our own path. We didn't come up and regurgitate a certain kind of music. We put a bunch of different metals together and made our own. And I think that that is hugely important when creating a band. And as a female, go out there and kick some ass."

BUTCHER BABIES' second album, last year's "Take It Like A Man", was produced by Logan Mader, who has previously worked with FIVE FINGER DEATH PUNCH, DEVILDRIVER, CAVALERA CONSPIRACY and GOJIRA.