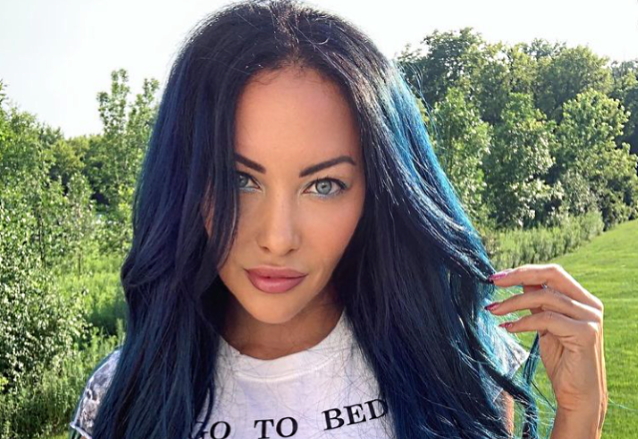 BUTCHER BABIES vocalist Carla Harvey went on the "Side Jams With Bryan Reesman" podcast to talk about her work as a grief counselor, death doula, and previously, an embalmer, and how those vocations have influenced her life.

She says her family didn't want her to become an embalmer because of what she would see.

"It is a very different, graphic thing," Harvey told Reesman. "You go to a funeral, but you're not preoccupied by what happened to get the body to the point that it's sitting in a casket looking that fresh in front of you. It is completely different than what you think. Embalming is pretty hardcore. I also was an autopsy technician. It can be a little bit barbaric and a little bit gory, and I do think you'd become desensitized after you've done it. It becomes more like a science project. But it is something that most people don't see, won't see, and probably would have a very hard time getting out of their mind. I was just telling Charlie [Benante, ANTHRAX drummer and Harvey's boyfriend] the other night [while] we were out having steaks, I couldn't even eat meat for a while when I started mortuary school, when I started my embalming class. Because when you open up the body and you realize you know what your steak is... I don't know, something comes over you. I started to treat my body with a lot more respect after embalming and doing autopsies because I realized how lucky we are to be upright and walking. You really get a sense for how your body works. We're all these fine-tuned beings walking around upright and doing all these crazy things. I think everyone should at least go to a Body Worlds exhibit and see what is on the inside. So seeing it firsthand [through autopsies], and then also involving people of all different ages, from infancy to old age, has really taught me to live in the moment, be appreciative of what you have, and be respectful of your body."

Harvey also talked on "Side Jams" about working as a grief counselor and a death doula which she described as two separate vocations with some similarities.

"What I do with my grief counseling is I help people who are struggling with a loss," Harvey said on "Side Jams". "It could be the loss of a certain kind of lifestyle, loss of a job, a divorce, or a death. And then as a death doula, I actually help the person who is terminally ill, or dying, [to] fulfill legacy projects. I help them have choices where they didn't know they had choices throughout the death process. I help explain to the family what is happening. I help finalize paperwork that needs to be finalized, but a lot of times it's even just sitting with someone in silence and holding their hand and just being there for people in a time when not everyone wants to be there for you."

There are some people who Harvey counsels who do not know about her musical life. "Not everyone that I counsel is a fan of metal, but many are," she explained. "I found a great niche because a lot of people who love metal don't know how to reach out for help." When asked why she thinks that is, Harvey replied, "I think a lot of metal heads from youth are kind of disenfranchised people. People who were misfits, people who were not supposed to be emotional. Metal is a great release for people, whether people realize it or not. When you go to a concert, you're self medicating by getting out there and screaming and getting in the pit. Women are more apt to discuss their feelings with friends and family members. Men don't do that as much. So my clientele is very male heavy. And it's been awesome to see the light bulbs go off and for them to realize that they can be open, they can discuss things freely. It's a healing process."

Metalheads, Harvey said, "struggle with mental health, they struggle with processing grief. So it's been a really cool way for me to reach out to people that love metal and say, 'Hey, it's okay to feel this way. I can help guide you into healthy grieving practices.’ It's been awesome to be able to help people hands-on again."

BUTCHER BABIES have just kicked off a headlining tour, "Butcher Babies Vs. Goliath", which features the band performing its debut album, "Goliath" — released in 2013 via Century Media Records — in its entirety along with recent hit singles and new material. The tour will stretch to October 8 and will see the group stop at several of the largest U.S. rock festivals, including Rocklahoma, Louder Than Life, Aftershock and more.

Hailing from the City of Angels, BUTCHER BABIES have released two EPs and three albums to date, with their latest 2017 LP, "Lilith", debuting at #1 on iTunes Metal chart and #7 on iTunes Rock chart. The band kicked off 2021 by independently releasing a handful of newly energized singles produced and co-written by Matt Good (FROM FIRST TO LAST), including the most recent track "It's Killin' Time, Baby" in August. Along with previously released singles "Last Dance", "Yorktown", "Sleeping With The Enemy" and "Bottom Of A Bottle", all are to be featured on their upcoming independently released EP.