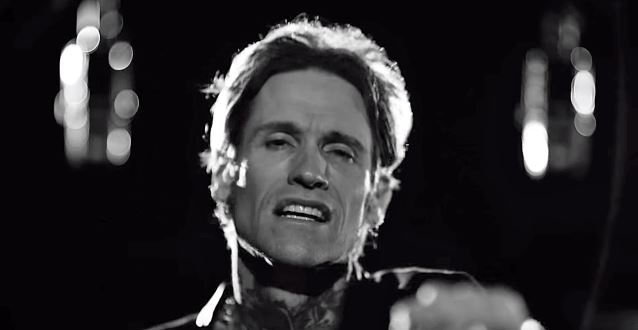 California rockers BUCKCHERRY have released the official music video for the new version of their song "The Feeling Never Dies" that features guest vocals from Grammy Award-winning country artist Gretchen Wilson. The track is featured on the digital deluxe edition release of the band's album "Rock 'N' Roll", which was made available on January 29 via F-Bomb/Caroline.

"There aren't too many duets anymore and we love country music," BUCKCHERRY vocalist Josh Todd said. "Gretchen was the perfect fit and we are fired up to get this track out there!"

On "Rock 'N' Roll", BUCKCHERRY staunchly upholds the commandments of rock music with an arsenal of new anthems primed to explode on impact and teeming with riotous energy, sexy swagger, and primal chops intact. It's something that the boys have done since day one, but it's more necessary now than ever.

"There's been so much talk about how rock 'n' roll is dead and all of this bullshit," said Todd. "The funny thing is, that's been going on since we put out our first record in 1999. We wanted to call the new album 'Rock 'N' Roll', because this is what we've been doing our whole lives. We focused on making a record that encompasses all of what we are. You get every flavor of BUCKCHERRY."

BUCKCHERRY has added fuel to the genre's fire for nearly two decades now. The Grammy Award-nominated outfit is responsible for smashes including "Lit Up" off their gold-certified 1999 self-titled debut as well as "Crazy Bitch" and "Sorry" from 2006's platinum "15". Along the way, they've shared stages with everybody from AC/DC and MÖTLEY CRÜE to SLIPKNOT and ROB ZOMBIE, among others.