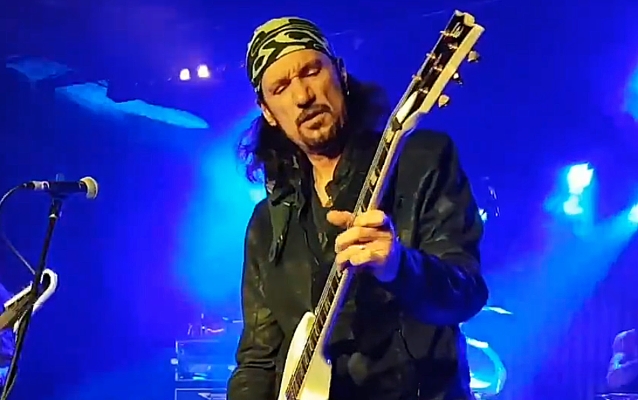 Former KISS and current GRAND FUNK RAILROAD guitarist Bruce Kulick recently spoke with Rock Titan. The full conversation can be viewed below. A few excerpts follow (as transcribed by BLABBERMOUTH.NET).

On his upcoming KISS-themed performances with bassist Todd Kerns and drummer Brent Fitz of Slash's backing band, THE CONSPIRATORS:

Bruce: "The songs that I'm going to be doing for those events, many have never been done before, so that's super-exciting, but it's also a lot of pressure. Do I need to go over 'Unholy'? Yes, but I [only need to] play it once or twice. It's in my DNA; I've performed it many times; I've done it at clinics for many, many years, so no big deal. But even a simple song — it's not super-simple, but 'Uh! All Night', for example, from 'Asylum', which we never did [live]. We did a great video with it, with the girls running around pushing, I don't know, cribs or something — I couldn't quite figure out that video — do I need to go over it repeatedly? Yeah, because I hadn't played it in over 30 years. I take performing very seriously, where I always want to be my best. The GRAND FUNK shows, we have that down so well that I can be a little more relaxed about hitting the stage... I want to do my best. You can imagine how I feel about performing material from my era never performed before, and to have to relive it, rehearse it. Some of that stuff is a lot more complicated than I ever imagined, and being 30 years on doesn't make it easier. That's why I have a lot of respect for [Paul] McCartney, Mick Jagger and all who have been doing their thing for all these years now and they still really excel at it. I have my heroes to look up to, but the pressure for me to be as great as I can be is part of my DNA I can't help."

On whether he plans to play other KISS-themed concerts in the future:

Bruce: "I can see this going on forever if I continue to do my gigs, GRAND FUNK schedule permitting. That band has been good to me, and I do love playing with them. I'm going for some stuff that I've never played, stuff that I personally like. One song that was never released, but all the KISS fans know it — something that was cut for 'Crazy Nights'... The hardest thing is me figuring out some of my solos. I realized that I'm going to have to maybe interpret a few, because I definitely had a certain approach then. The early '80s, everything was about flash and speed, yet later on, not that I wasn't flashy or interesting on 'Revenge', but it was a little different style, a little more aggressively played. It's been a real learning curve. It's exciting too, because I recognize how special those songs are, and I'm hoping if they come off even half as good as I think they can, the people are going to be blown away."

On the "Kiss Kruise":

Bruce: "I'm really proud of the band to open it up. I know years ago, I really hoped to be on the 'Kruise', and I remember Gene [Simmons] just kind of saying, 'Well, if you were going to be on the 'Kruise', then we'd have to ask maybe Ace [Frehley] or Peter [Criss].' Over time, I think they realized, that's what the KISS fans really wanted — they wanted more KISS content. Let's face it — you've got real KISS die-hards on the 'Kiss Kruise'. There's many that go every year. These people have a wonderful time; these people have a true passion for it. I think the cruise thing is a wonderful way for people to enjoy music... This year, now that they kind of broke the wall bringing me last time, now they were able to Ace to be on board. This one's going to be really special, obviously. At one point, they were cautious about that, and now it's completely the other way. What an exciting time for the KISS fans — decades of KISS, that's what's going to be represented on that boat. There's only so much that the current makeup band is going to do representing my era. I always joke around and say, 'I wave the flag for my era,' but there were many, many fans that got introduced to KISS from the non-makeup years. There's something about KISS that's unique and special and wonderful that really, really strikes a chord in people, that they hang in there, even when it's controversial. Even when they don't necessarily agree with something or like something, they still always hang in there."

Bruce: "I always thought that there could be a reunion, and Ace and Peter would be in the band. Then how it evolved from there where they realized, 'Makeup is probably the best way for us to continue. We're way more unique this way,' and I wasn't upset, although I missed being in the band. I did feel very much that giving it to someone like Tommy Thayer, who's such a good guitarist [and] who knew that kind of world and could be Ace — the Spaceman, rather — absolutely was the right guy for the job, because they weren't going to continue and start to do 'Asylum' material or 'Revenge' material that way. Then, of course, going to Eric Singer, perfect height, great player, when Peter wasn't going to work out for them anymore, those were the perfect two guys to become the Cat and the Spaceman...nTo become the Spaceman wearing that outfit, that would be a disconnect for me."

On whether he'll ever write a book:

Bruce: "People always ask, 'Are you going to write a book?' I did start one years ago, and then I kind of backed away from it. Eventually. I think I've got great stories. I used to do a lot of stuff on my web site, where I would talk about each tour around an anniversary of something. I held back on 'Asylum' because I know a lot of people would like that story, and I kind of got stingy with it, because once it's on the Internet, then it's there. But I'd like to look at my book as being more like through the years of my entire career, but certainly when it comes to the KISS years, my experience of what it was to be creative in such a huge band. I'm not looking at a slam kind of thing. I learned so much from those years, and I don't have to go there."

Bruce: "I kind of knew that they were gearing up to that about a year ago. I still don't really know any particulars. I know they're going to put together a terrific show, [but] beyond that, I don't know. I know a lot of fans are talking about, 'Oh, they should have some former members appear.' I know Paul [Stanley] was asked that, [and] he handled it like he doesn't know if he wants to or will do that. Either way, I'm very supportive. I think it is important for them, if they realized they want to go out big, to get it out there. I think that they mean it, by the way, in the sense of a real 'touring' touring. I know with a band, it's very easy to do a one-off whatever afterwards, or suddenly, you might decide to do a residency, because that's not really going on tour. I don't know, and I can't fault them ever if you want to do something and you get the offer and you commit and the people support it and enjoy it... I wish them the best, and obviously, if there's ever an opportunity where they did want to pay a little tribute to any of the other eras, they know I'd be there. I'd love to be there for that. We'll see what happens."