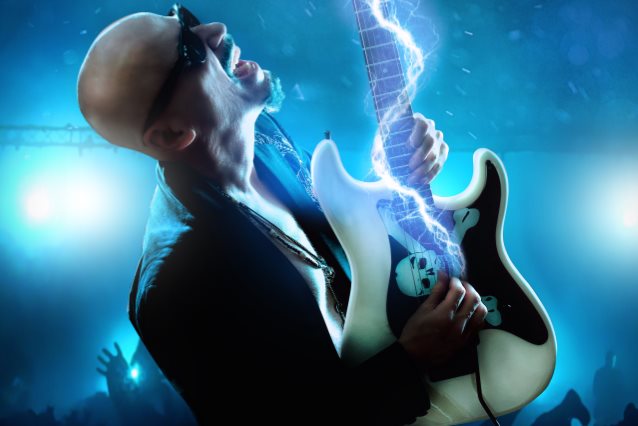 Throughout his forty-year music career, Bob Kulick has worked with an astonishing array of artists: from Meat Loaf to MOTÖRHEAD. From KISS to Michael Bolton. W.A.S.P. to Diana Ross as well as legends such as Roger Daltrey, Alice Cooper, Lou Reed and Paul Stanley's first solo album and tour.

After serving as a sideman and producer for much of his professional career, Kulick has decided that it was time to release a solo album — and he brought along a few of his good friends to support him in the endeavor.

"Skeletons In The Closet" will be released on September 15 through Vanity Music.

Joining Bob on the album are:

Bob himself provided all of the guitar tracks and co-produced the album, along with Bobby Ferrari at Vegas View Recording in Las Vegas, Nevada.

"Skeletons in the Closet" track listing:

Fifty years is a long time to have a career in any type of industry. However, fifty years in the cut-throat music business is a miracle unto itself. Not to mention a relevant, successful run in not only one but several fields.

Grammy Award-winning guitarist, songwriter and producer extraordinaire Bob Kulick began his musical profession at 16 — when most high schoolers are still trying to figure out where they're going in life — appearing on the 1966 album "Winchester Cathedral" from the RANDOM BLUES BAND, the "baby band" that Bob played in that played The Café Wha in New York's Greenwich Village alongside Jimmy James and the BLUE FLAMES (later rechristened Jimi Hendrix). "This was the first club gig I had experienced and it completely changed my world!" recalls the guitarist.

1973 saw Kulick make the connection that he has been associated the most with throughout his career. He auditioned for — and got passed over by — KISS. Instead of being dejected, the six-stringer aligned himself with the band over the years, playing on the studio material on "Kiss Alive II", providing solos on the "Killers" album, co-writing "Naked City" from "Unmasked" and guesting on Paul Stanley's 1979 solo album and tour a decade later. He even suggested his brother to the band. "It took multiple tries but we finally got him there!" Bob laughs.

Aside from KISS, Bob has, of course, played with Meat Loaf, BALANCE, Lou Reed, W.A.S.P., SKULL, MURDERER'S ROW and several other bands and studio projects over the years.

Fifty-one years after making his recording debut, the well-respected axe slinger has decided it's time to release his first actual solo album, "Skeletons In The Closet". Kulick explains, "I started writing new music in 2015 which then turned into songs co-written with my former BALANCE bandmate Doug Katsaros and my brother Bruce. I've had the thought of doing a solo project using some of the musicians I had worked with in the past for some time. Now armed with four new original songs, my girlfriend (photographer Julie Bergonz) introduced me to producer Bobby Ferrari at Vegas View Recording and he loved the idea of working with me, the guest artists and the four new songs and that introduction led to the making of this album."

A ten-song affair, "Skeletons In The Closet" is half brand new songs and half material from his storied past. "The idea of doing these new songs / retrospective songs as one CD only came to me after the new original songs were done. Then we added our cover of 'Goldfinger' and pulled five of my all-time favorite songs out from my 'closet,' creating 'Skeletons In The Closet'."

Kicking off with "Rich Man", the uplifting track is the lyrical juxtaposition between what we don't have and being "rich" because we have "you" — a girlfriend, lover or a guitar or whatever it is that makes everything else alright. "Not Before You", co-written with Bob's brother Bruce, is a specific reference to, in this case, a new love. "London", Bob says, "is Jack The Ripper sideways. Our homage to Sweeney Todd and a 6 / 8 tempo and feel that, with Dee Snider's vocal, takes you to that place in London where 'No one hears you scream in the darkness.'" Frankie Banali's unique drumming concept helped turn this into a larger-than-life song. "Goldfinger" is a tongue-in-cheek tribute to James Bond films — a heavy version of the classic Shirley Bassey song. "Player" is a theme we're all familiar with — getting "played by someone." This is another take on that story. Bob's back catalog begins its appearance with MURDERER'S ROW's "India" with an Indian / Middle Eastern metal double-bass-drum guitar gallop and with a coral sitar solo played by Kulick. With the title track, Bob states: "I often look to start and/or end recorded songs by setting a mood, vibe or sound effect that 'speaks.' In 'Skeletons In The Closet', you can hear the skeleton sounds in the beginning of the song, helping set the dark mood." "Can't Stop The Rock" "was written produced and recorded when David Eisley and I came up with the Sponge Bob song 'Sweet Victory'. This is another 'rock' lyric song but a fun one we came up with which went great with 'Sweet Victory' at that time." From Bob's SKULL days, "Guitar Commandos" sees him trading lead guitar licks with his brother Bruce. "It's basically a song about the road and touring," he says. Wrapping up the album, "Eyes Of A Stranger" is a song about how crazy love is. "The ups and downs of love, ya know, but also an uplifting and driving track to finish things off." 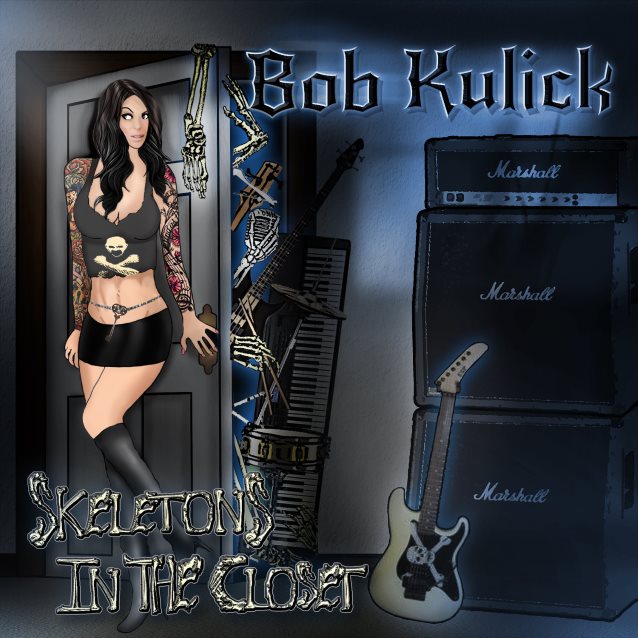