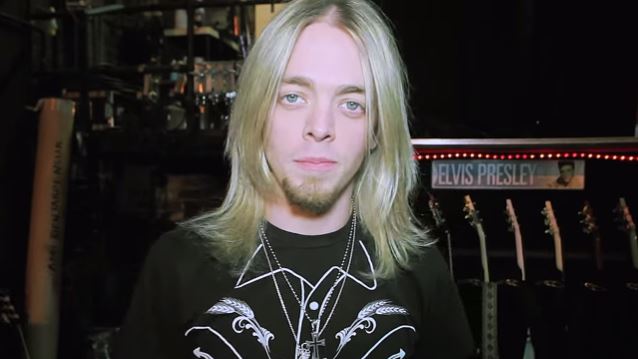 The Glasgow Police Department and BLACK STONE CHERRY are asking fans for their help in recovering the instruments.

Anyone with information is urged to contact the Glasgow Police Department at 1-270-651-5151.

BLACK STONE CHERRY's fourth album, "Magic Mountain", sold around 13,000 copies in the United States in its first week of release to debut at position No. 22 on The Billboard 200 chart. This number is in line with the first-week performance of BLACK STONE CHERRY's last CD, "Between The Devil And The Deep Blue Sea", which shifted 13,000 units back in June 2011 to land at No. 29.

"Magic Mountain" was released in North America on May 6 (one day earlier internationally) via Roadrunner Records.

Regarding BLACK STONE CHERRY's songwriting approach on "Magic Mountain", Wells told About.com Heavy Metal: "We had a freed mind, I guess, is the best way to put it. We weren't really concerned about radio and what's popular and what's going to sell. We just became more confident in who we are as a band, who our fans are. We just wanted to make a great rock album. We wrote songs with solos, we wrote songs that were longer than three minutes. We just wanted to write a great album."

Asked how the band picked Joe Barresi (CHEVELLE, TOOL) to produce the new CD, Wells said: "He actually reached out to us about doing it. We checked him out, had a meeting with him, and just fell in love with his method of recording and his ideas. He was on the same page we were. He wasn't about trying to make a cookie-cutter polished album. He wanted to make something cool. That's what really drew us to want to work with him."

Wells also spoke about the inspiration for the "Magic Mountain" album title. He said: "We had the song first. We thought it was a cool title. We knew we wanted the album to be titled that. Basically, it's a metaphor for open your mind up. If you have a place, whether it's spiritual or metaphorical that you like to go to, that could be your magic mountain. We just thought it was cool and captured the essence of the whole album."