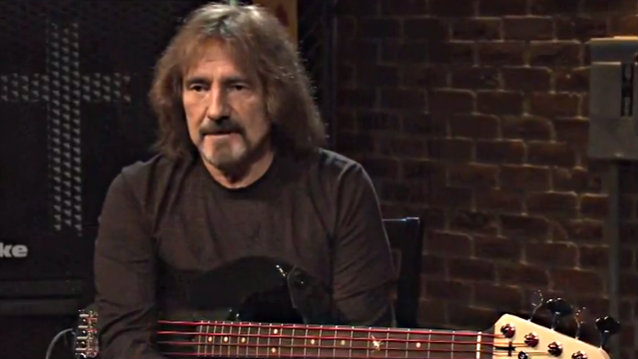 BLACK SABBATH bassist Geezer Butler recently spoke to Time Out Dubai about the possibility of the band releasing another studio album to follow last year's reunion CD, "13". "We've still got four tracks left over from ['13'], so maybe we'll fill in the other four or five tracks and put out another album. If it's right. We wouldn't do it just for the sake of it, or the money or whatever. But yeah, maybe."

Butler also talked about SABBATH guitarist Tony Iommi, who was diagnosed with cancer in 2012. "Tony is probably healthier than everybody else now, after all the stuff they've done to him," he said. "He's really done well, he's definitely in remission now."

Regarding founding BLACK SABBATH drummer Bill Ward, who was originally announced as part of the band's reunion album and tour in late 2011, but bowed out in early 2012 over a contract dispute, Butler said: "We started off with Bill Ward this time around and it just didn't happen… To be blatantly honest, he just couldn't do it anymore. He was thinking that we could take, like, ten years to do the album, whereas we knew we only had so long to do it and get out on tour, while you're still good at what you do. Bill was a bit unfit, and ironically in hospital with intestinal problems, so he'd have had to leave the tour anyway if we'd gone out with him."

He added: "I love Bill — we all love Bill. It's a horrible thing he couldn't complete [the album]. SABBATH is SABBATH, it's the four of us. We were almost going to call the album '75 Percent' at one time [laughs], because that's what it felt like. Especially when [RAGE AGAINST THE MACHINE's] Brad Wilk came in drumming — that was [producer] Rick Rubin's idea to bring him in, and we thought if we're bringing a brand new drummer, why can't we have Bill? But Rick Rubin said, 'We can't be in the studio forever waiting for Bill to get it right.'"

Butler was also full of praise for producer Rick Rubin, calling their working relationship "incredible — it's just like having a fifth member." He added: "Tony came out with tons and tons of riffs, we picked out what we liked, about 40 riffs that Tony had that we thought were worth doing. And then Rick came in and narrowed that down to 14 songs, and it's just like having someone who sees you from the outside after all these years. He didn't want us to come out with a typical heavy metal album. He said ‘when you started there was no such thing as heavy metal, so forget what's come after you, and go back to what you were before that, before METALLICA and all those bands, and just do what you did back then, that experience, play live in the studio as if you were onstage in a little club,' and that's what we did."

BLACK SABBATH is scheduled to end the touring cycle for "13" with a massive July 4 gig at London's Hyde Park, and according to Iommi, it could be the last time SABBATH ever plays live. Iommi told Metal Hammer, "It could be the last ever SABBATH show. I don't want it to be, but there's nothing really planned touring-wise after that show, so for all we know that could be it, really."

Iommi admitted that even if SABBATH does tour again, he does not want to travel as extensively as the legendary group did in the past year. He explained, "To be honest, I don't want to be touring to this extent too much longer, because it makes me feel so bad."

Iommi had to return home for treatments every six weeks during most of the "13" tour, but said that it's now a matter of waiting to see whether the disease comes out of remission. He revealed, "I'm at a stage now where I have no support, which means I have to see whether the cancer is coming back or if it's still there or what. I just don't know. It's a bit of a worry. After we finish this tour, I'll go in and have scan, so we'll see what that shows up."

"13", the first SABBATH album to feature Butler, Iommi and singer Ozzy Osbourne in 35 years, debuted at No. 1 on the U.S. and U.K. album charts last year.

The band has not hinted if it will make another studio album, and Ozzy told The Pulse Of Radio last year that he was fine with the possibility of "13" being its last one. "For whatever reason, if we don't do another studio album, this is where I would have liked to have been at the end of SABBATH, my days with SABBATH," he said. "But life has a funny way of twisting things around, and if we do do another album, it'd be great, but if we don't, this will be a nice way to round it off."