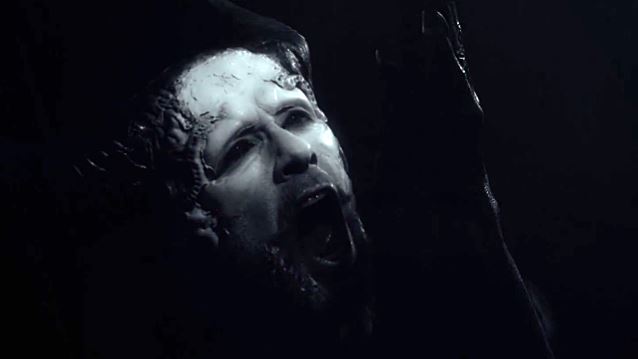 "Messe Noire", the new video from Polish extreme metallers BEHEMOTH, can be seen below. The clip was helmed by Brooklyn-based director Zev Deans, who brings a visually dark and surreal atmosphere to a song and album that is one of BEHEMOTH's most bleak. To add to the atmosphere, costumes were provided by fashion designer Sharon Toxic. The combination of these visual and auditory talents could not be more ideal.

Deans says: "The story of Lucifer's fall, followed by his defiant rebirth, reminds me of [BEHEMOTH frontman] Nergal's own personal struggles of recent years.

"Like Lucifer, BEHEMOTH has recovered from hardship, and they are stronger than ever.

"With 'Messe Noire', I was lucky enough to work with some of the most talented people in the genre.

"I owe the success of this project to the intense sacrifice that Sharon and the rest of team gave to this work."

Adds Adam "Nergal" Darski: "It was actually our drummer Inferno's idea to work with Zev Deans. He showed me a PORTAL video that literally blew my fuckin' mind!

"For a long time, we've attempted to reach a new ground and artistically leave the comfort zone. 'The Satanist' is THE record that challenges us on so many levels… and here we are, exploring new grounds with a video producer who is a genuine visionary!

"The 'Messe Noire' video surely adds new quality to our art and makes it even more transcendental… I am proud!"

BEHEMOTH's latest album, "The Satanist", sold around 10,000 copies in the United States in its first week of release to debut at position No. 34 on The Billboard 200 chart.

The definitive BEHEMOTH biography, "Behemoth: Devil's Conquistadors" by Lukasz Dunaj, was released in February via Metal Blade. The 490-page, hardcover tome includes quotes and anecdotes from current and former members that provide context and details in addition to the author's narrative, plus interviews with Tomas Krajewski, Rob Darken, Graal, Havok, and more. The artistically presented pages are splattered with old photos of the band, flyers, lyric sheets, etc.

Originally released in Poland in October 2012, "Sacrum Profanum" was previously described by Darski as "a really long in-depth interview."