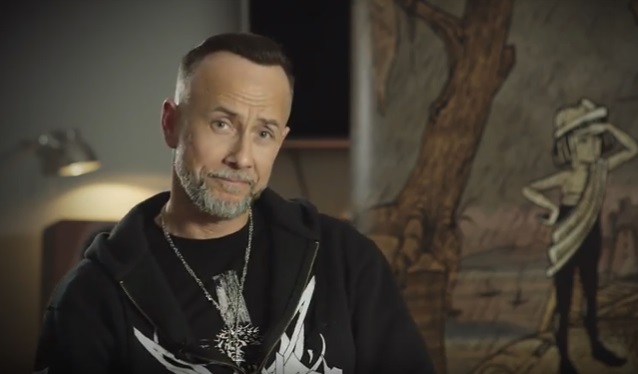 BEHEMOTH frontman Adam "Nergal" Darski has joined forces with the Punch Punk Games studio to bring to life "Apocalipsis: Harrry At The End Of The World" game. It's a story of a journey through a world inspired by the Book of Revelation and Danse Macabre aesthetics.

Apocalipsis gameplay, combined with the unique artistic style of 15th-century engravings by artists such as Hans Holbein, Michael Wolgemut and Albrecht Dürer, creates the perfect backdrop for a story about heartbreak and redemption in a new world filled with dread, death, and disease.

Featuring narration by Nergal and atmospheric new renditions of BEHEMOTH's music, "Apocalipsis: Harry At The End Of The World" will be a journey to remember.

What would you do if you lost the one person who meant the world to you? Would you fall into despair, or would you refuse to accept it and risk your soul to save what you've lost? After all, the Apocalypse doesn't have to mean the end of civilization as a whole. In fact, for most of us it's when we lose someone we love.

"Apocalipsis: Harry At The End Of The World" is available on Steam, priced at $6.99 for the regular version of the game and running a special 25 percent discount for the deluxe Wormwood Edition for the first week after launch. Beside the game itself, the Wormwood Edition also includes the game's soundtrack and beautiful digital artbook for download.

Meet Harry, a boy whose world collapsed with the loss of his loved one. Once carefree, he must now venture into strange, unwelcoming lands to recover what's been lost. Joining him on his journey, you will meet fantastical creatures, straight from the minds of 15th-century European artists, and help him overcome his own personal demons.

In "Apocalipsis: Harry At The End Of The World", you will:

* Play a classic point-and-click adventure game with a twist
* See medieval art being brought to life
* Meet creatures straight from 15th-century codices
* Experience a journey through the end of times, and bear witness to one of many possible endings
* Visit more than two dozen unique locations, with puzzles to be solved and hidden meanings to be discovered
* Shake your spirit with a foreboding soundtrack inspired by Danse Macabre aesthetics

And all you metalheads out there will enjoy the new, somber renditions of BEHEMOTH's music hidden in the game, as well as hearing frontman Nergal's dark voice telling you Harry's story.

"Apocalipsis: Harry At The End Of The World" has been developed by Punch Punk Games and is published by Klabater. It is available now for PC and Mac OS.