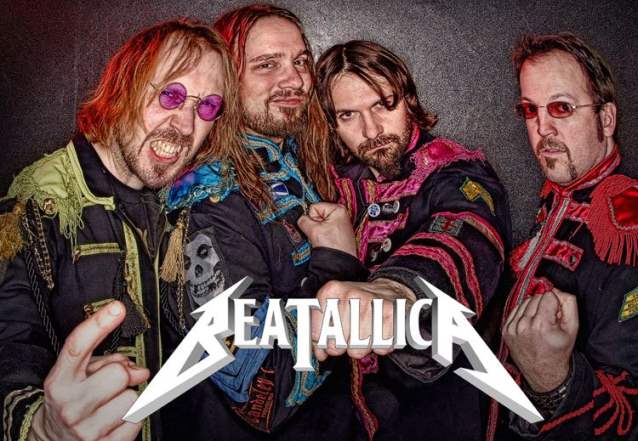 TheRighttoRock.com has issued its latest podcast (episode #155), featuring an interview guitarist Grg Hammetson III of BEATALLICA — a satirical mashup act whose hilarious schtick marries the songwriting prowess of THE BEATLES to the deep-throated rock growl of METALLICA. The chat lasts approximately 25 minutes and can be streamed using the audio player below.

BEATALLICA's third full-length album, "Abbey Load", was released on April 16 via Oglio Records (a label that is celebrating its 20th anniversary this year).

"Overall the album is our darkest," explains guitarist/vocalist Jaymz Lennfield. "Not sure why it turned out that way, to be honest. We didn't realize it til we got to listening to the first mixes. It sounds brooding in places. Not like we tuned down any more or played any stoner rock or anything. But the overall vibe is deeper than other projects we've done. Maybe it's 'cause THE BEATLES' 'Abbey Road' was the last release for them — like the end of an era. And we were placing our fingers on that. After a while, I got to embrace that whole vibe.

"BEATALLICA is always fun and interesting, and yes there are 'candy' songs on the album such as 'Help!' and 'I Saw Her Standing There'… but there is something more foreboding about 'Abbey Load' than what we initially thought."

Once more, BEATALLICA have successfully found links between both aforementioned bands, most notably on the album's tour de force, "Abbey Load Medley". "The medley...well, it's obviously one of the great famous pieces of rock music," says Lennfield. "We really enjoyed working in NEWER METALLICA tunes.

"Folks always ask us how much old stuff from METALLICA we can use. Helloooo...they have a LARGE catalog, so use it! Those tunes work great, plus the fact that we are doing what we always do: deal with tempo, time signature, rhythm patterns, keys from major to minor, adding our own riffs, etc., but now we have to make all the songs in the medley sound like they fit. Not just one song at a time, but now five songs, bang-bang-bang. The challenge was irresistible."

"BEATALLICA is so much more than a novelty cover band," adds Oglio Records founder Carl Caprioglio. "BEATALLICA's members and producer are among the most creative and talented people I have encountered in my years with Oglio Records. Their ability to blend influences from these two legendary bands is as amazing and impressive today as it was when we met in 2006."

Imagine what the BEATLES' "Abbey Road" would have sounded like if it had been originally released by METALLICA, and you have a good starting point for "Abbey Load".