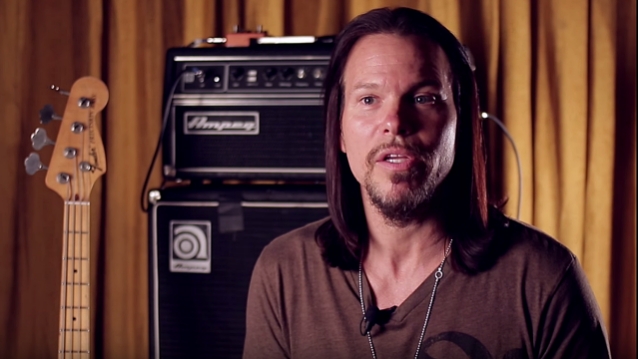 Bassist Sean McNabb has announced his departure from LYNCH MOB.

McNabb made his exit official via a Twitter post on Tuesday (November 19). He wrote: "I'd like to thank all the fans that supported LYNCH MOB, & me being a part of it for the last eight years, and always. As of today I'll be stepping down from that position and wish everyone the best. Super proud of 'The Brotherhood' record & the live shows we did. God bless SM"

In addition to playing with LYNCH MOB, McNabb is known for his bass work with such bands as QUIET RIOT, DOKKEN, GREAT WHITE and HOUSE OF LORDS. He is also a TV and film actor, show host, writer, singer and composer, and he does a lot of charitable work.

In a 2018 interview with Bass Player magazine, McNabb admitted that bass was not his first instrument. "I started on cornet but I just couldn't get a sound," he said. "My brother was the drummer in a jazz band, and I always gravitated toward the rhythm section. I switched to bass shortly after that. My mother had a guitar, I started playing it with my fingers and it just kind of made sense."

Guitarist George Lynch recently confirmed that the next LYNCH MOB album will feature vocalist Andrew Freeman, who has been playing select shows with the group following last year's departure of Oni Logan.

LYNCH MOB's most recent album, "The Brotherhood", was released in September 2017 via Rat Pak Records.

I'd like to thank all the fans
that supported Lynch Mob, & me being a part of it
for the last eight years, and always. As of today I'll be stepping down from that position and wish everyone the best. Super proud of The "Brotherhood" record & the live shows we did.
God bless
SM pic.twitter.com/jFhocVEYja