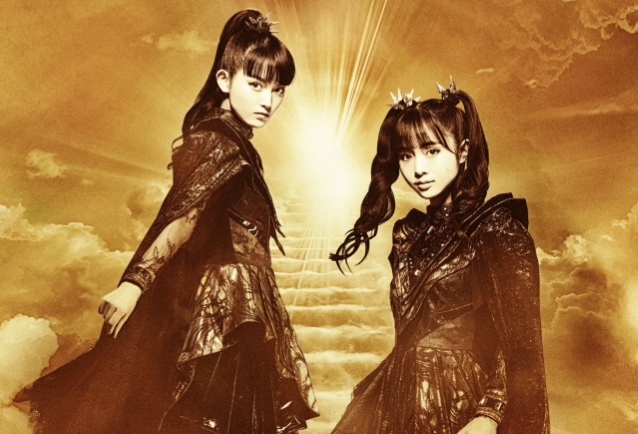 Japanese pop-metal band BABYMETAL, which announced that it will "seal" its commemorative 10-year legend of live performances as of Sunday, October 10, has released a video, "The One - Stairway To Living Legend", to wrap up its 10th-anniversary year.

In the video, while BABYMETAL's key song "The One" plays, Su-Metal and Moametal climb up a long stairway from a sea of clouds, portraying their 10-year journey on earth as they now become a Living Legend.

Last October 10, BABYMETAL started its 10th commemorative year and it celebrated the release of its greatest-hits album, "10 Babymetal Years". Following this release, they successfully finished a series of 10 performances at the prestigious Nippon Budokan between January to April of this year, hold an exhibition at hmv museum commemorating their release of their first live history book "10 Babymetal Legends" which summarizes all activities of their 10-year journey, and ended with an exhibition at Tower Record Shibuya in which they showcased several stage items from their performance at the Nippon Budokan, simultaneously celebrating the release of their live album and live footage called "10 Babymetal Budokan".

With the end of BABYMETAL's 10th-anniversary year, BABYMETAL will be "sealed" from the world and only the Fox God knows when that seal will be broken.

BABYMETAL was formed in 2010. Their mission was to unify the world through heavy metal by creating a fusion of heavy metal and the Japanese pop genre. Their music contains a stunning mix of electronic pop, a pinch of alternative and industrial rock, and is leveled up by fast-driven heavy metal. Their live shows are ground-breaking and epic visual as well as sound performances. BABYMETAL continued to travel the path of metal with the international release of their three albums, telling the story of the mighty Fox God and his brave metal warriors.

A book about the first ten years of BABYMETAL, "Bessatsu Kadokawa Souryoku Tokushuu", was released in Japan in October 2020. It contains a long interview with Su-metal and Moametal as well as never-before-heard stories from band producer Kobametal from BABYMETAL's decade-long history, photos taken from live shows, a discussion between Demon Kakka and Kobametal, and much more.

BABYMETAL's third studio album, "Metal Galaxy", came out in October 2019 via earMUSIC/Edel. The follow-up to 2016's "Metal Resistance" is based on the concept of "The Odyssey Of Metal Galaxy".