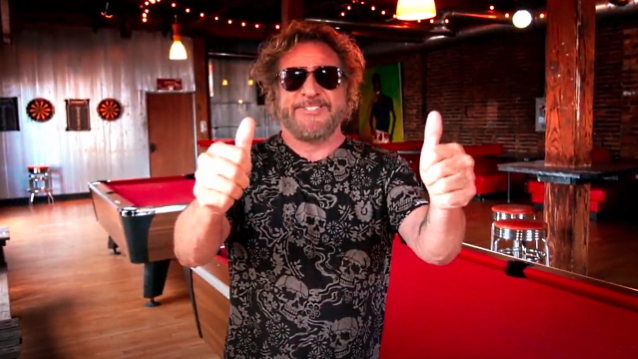 Hosted by beloved rock icon Sammy Hagar, "Rock & Roll Road Trip" cemented itself as one of the network's top performing programs, captivating viewers every week as the Red Rocker (Hagar) hit the road for candid conversations and epic jam sessions with some of the biggest names in entertainment. Past seasons have captured Hagar cruising across the country to legendary landmarks such as the Whisky A Go Go, the Fillmore Theatre, the SXSW Festival, the Red Rocks Amphitheatre and more, to rock out and talk shop with eclectic guests including Dave Grohl, Adam Levine, Vince Neil, Alice Cooper, John Mellencamp, Mick Fleetwood, Nancy Wilson, Willie Nelson, James Hetfield, Sarah McLachlan and John Mayer, among many others.

In this unforgettable finale, Hagar gives the series the sendoff of a lifetime with an evening of laughs, music, and memories as he broadcasts live from the landmark Woodshed Studios in North Hollywood. Throughout the episode, Hagar looks back on some of his favorite moments, from the incredible sights he's seen to the iconic entertainers he's interviewed across five seasons and 56 episodes. The night also finds Hagar discussing the impact of the show on his life; reflecting on his time with VAN HALEN; showcasing some of his priceless bloopers; sharing rare never-before-seen footage; and taking the stage for a special live performance featuring three classic songs.

Additionally, Hagar catches up with fan-favorite actor Greg Grunberg ("Star Wars", "Heroes", "Alias", "A Star Is Born"), owner of The Woodshed and drummer for the celebrity cover band THE ACTION FIGURES, who is on hand to give Hagar an exclusive tour of the one-of-a-kind, secret celebrity hangout, world-class multi-functioning studio and performance space. Grunberg is then joined by his fellow THE ACTION FIGURES bandmates Scott Grimes ("The Orville", "American Dad!", "NCIS: Los Angeles"), Adrian Pasdar ("Heroes", "Profit"), Jack Coleman ("The Office", "Heroes"), Nick Marzock ("American Dad!") and Brad Savage ("The Client List", "CHiPS"), before sitting down for discussions with additional special guests, including an appearance by iconic actor and musician Rick Springfield. The night concludes with a raucous two-song set with Hagar, his guests, and THE ACTION FIGURES members performing, followed by a heartfelt rendition of the VAN HALEN signature "Dreams", as Hagar takes the stage for a solo performance joined by his friend and THE CIRCLE bandmate Vic Johnson.

"I can't believe it's been five years already," said Hagar. "I set out to do one season of 'Rock & Roll Road Trip' to see if I could pull off my own TV show and enjoy doing something I'd never done before. I never dreamed we'd do 56 episodes and five seasons. It's been a blast."

"Having been here for every show and shoot since day one, it has truly been amazing to see this series grow into the program it is today," said AXS TV executive producer Stephen Stormer. "While this is the finale, we're going out on a high note — pulling out all the stops with an unforgettable evening packed with music, memories, and a whole lot more, as we celebrate what the last five years have meant to us. We are so grateful to our many fans who have followed along on this incredible rock odyssey, and we hope that they will join us to rock out one last time in this unique live series finale."