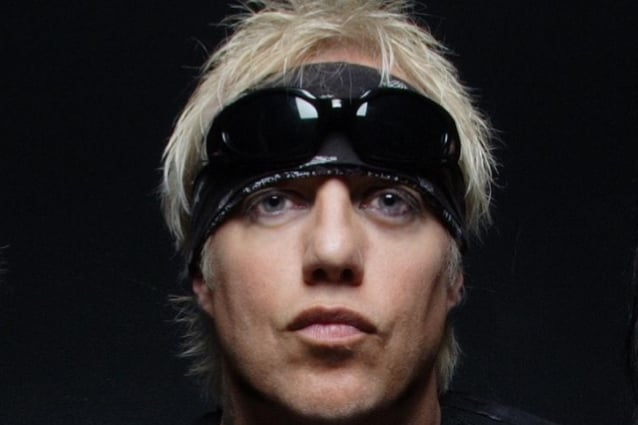 Sixteen-year-old audio has surfaced of late WARRANT singer Jani Lane purportedly admitting to having been "raped."

Word of Lane supposedly having been drugged and sexually taken advantage of by a member of a famous heavy metal band and the group's manager first emerged in "Dirty Rocker Boys", the 2013 memoir by Bobbie Brown, an actress and model and probably best known as the video vixen in WARRANT's "Cherry Pie" video. Brown, who met Lane on the video set, married the musician in 1990 and had one daughter with Jani, Taylar Jayne Lane, before the couple divorced in 1993.

Now, in a audio file sent to the Metal Sludge web site, Lane can be heard apparently acknowledging that he had been violated without offering any additional details regarding the alleged incident.

During an April 2004 interview with the "Hollywood's Monsters Of Rock" show on the Fremont, Ohio radio station 92.1 The Wolf (WOHF), Lane was asked what he could "legally talk about" regarding his split with WARRANT, which had occurred just a few months earlier. Jani, who was in town to play a show at Caeser's Crystal Palace in Sandusky, Ohio, responded (hear audio below): "I don't care. Sue me, put me in jail … whip me — I don't care. I've been divorced, married, raped — I don't care."

Jani's alleged rape made headlines last week when Brown told Fox News in an interview that it was "devastating to hear" the singer confess to having been sexually assaulted. "He admitted this to me before his death," she said. "It was traumatizing to watch him reveal those things and how much it had affected his life up to that point. When we were married, I had no clue. This occurred when he was just starting out on the Strip. So when I'm hearing all of this with him, I'm crying with him. I was going, 'We have to do something, we have to say something.' He was like, 'No! No!' It was a humiliation for a man to be in that position. It's so emasculating and humiliating. It would have been humiliating for him. So we couldn't say anything. Instead he lived with this anger inside. He felt like he couldn't say anything because he was a man. He was raised to be a man, not to cry. It was all mind-fucking. I could see how it would have been devastating and humiliating for him to speak up. I got his perspective from it, but at the same time, I felt so hopeless for him, knowing that he felt he couldn't say anything. And wouldn't. That affected him greatly his whole life. It was part of the reason he drank. It's sad, really."

Lane recorded several albums with WARRANT in late 1980s and early 1990s but left the group several times. The band replaced him with Robert Mason and released its latest studio album, "Louder Harder Faster", in May 2017.

Jani also had a daughter from his second marriage, Madison Lane; and two stepdaughters, Ryan and Brittany.