On December 16, at noon EST, there will be a special can release party at Noble Ale Works Brewery.

Fans will have the chance to sample the "Atreyu Superhero DIPA With Orange Zest" and hang out with the band in person.

Four packs of the beer will be available for sale. You won't want to miss this limited release. Cans will be exclusively available for sale at Noble Ale Works tasting room, located at 1621 S. Sinclair St in Anaheim, California.

ATREYU's seventh full-length album, "In Our Wake", was released on October 12 through Spinefarm.

Following a hiatus post-"Congregation Of The Damned" in 2009, Alex Varkatzas (vocals), Brandon Saller (drums, vocals), "Big" Dan Jacobs (guitar), Travis Miguel (guitar) and Porter McKnight (bass) returned firing on all cylinders with "Long Live" during 2015. It crashed the Top 30 of the Billboard Top 200 and earned widespread acclaim. Along the way, the boys sold out countless headline shows in addition to sharing the stage with everyone from SLIPKNOT and LINKIN PARK to Chris Cornell and AVENGED SEVENFOLD.

The band recorded in two chunks bookended by Brandon's touring obligations for HELL OR HIGHWATER. Working out of Feldmann's Los Angeles studio, they embraced this new approach as the producer still made them"wonderfully uncomfortable and willing to push harder," according to Alex. 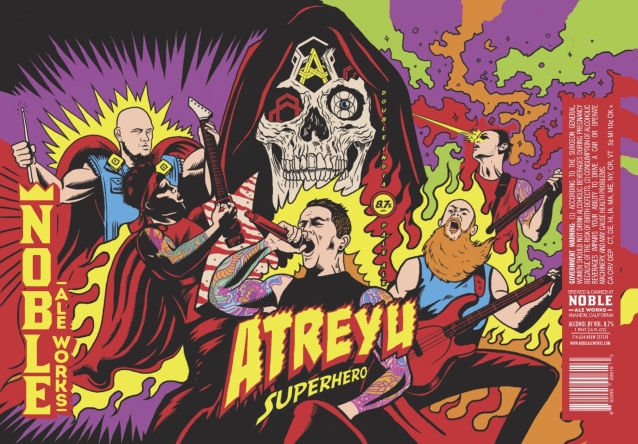