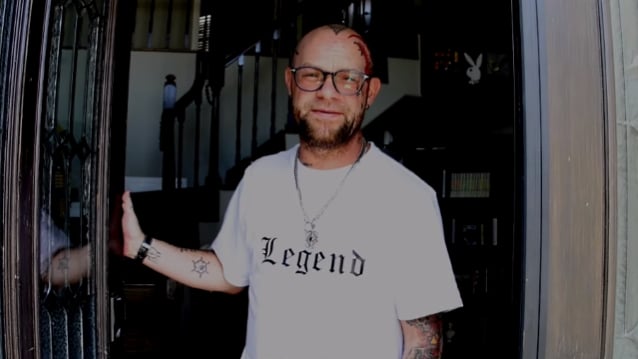 While Jason Hook and Zoltan Bathory are lying down guitar riffs in the studio for FIVE FINGER DEATH PUNCH's eighth album, the band's videographer Harry Reese paid a visit to Ivan Moody's house in Las Vegas, where the singer keeps most of his memorabilia. You can now watch the six-and-half-minute episode below.

Earlier in the month, FIVE FINGER DEATH PUNCH confirmed that Charlie "The Engine" Engen is laying down the drum tracks for the band's new disc.

It's not clear at the moment whether Engen will be made a permanent member of FIVE FINGER DEATH PUNCH or will continue as a hired hand.

Zoltan recently said that the new FIVE FINGER DEATH PUNCH material was "shifting back to that heavier side," and he compared it to 2007's "The Way Of The Fist" and 2009's "War Is The Answer".

FIVE FINGER DEATH PUNCH's new album is once again being helmed by Kevin Churko, the Canadian record producer/engineer and songwriter who currently lives in Las Vegas, where he works out of his private studio, The Hideout Recording Studio.