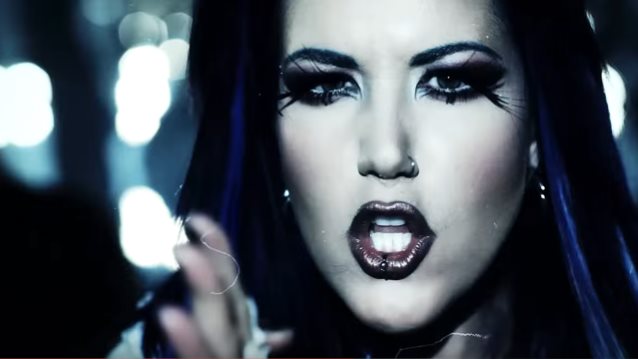 An acoustic cover version of an ARCH ENEMY song has earned praise from the band's lead singer, who called it a "beautiful tribute."

After Rabin Miguel's rendition of the ARCH ENEMY track "War Eternal" was posted on YouTube, it was shared on Facebook by frontwoman Alissa White-Gluz. She wrote: "Wow! This is great! I LOVE the arrangement! I sing our songs in clean vocals sometimes just to fuck around at soundcheck, but this is next level! Thank you for this beautiful fan art/tribute! We appreciate all the attention to detail and effort and talent required here!"

"War Eternal" was the title track of ARCH ENEMY's 2014 album, which marked Alissa's recorded debut with the band.

ARCH ENEMY guitarist Michael Amott told Rock Hard magazine earlier in the month that the band's new album is completely "written" and already "partially recorded." A September 2017 release is expected. He also confirmed that ARCH ENEMY's new guitarist, Jeff Loomis (ex-NEVERMORE), has not contributed to the songwriting on the group's new disc but "he's gonna be playing on the album, of course."

ARCH ENEMY will release a new live DVD, "As The Stages Burn!", on March 31 via Century Media. The set contains video footage of the band's largest stage production to date from their performance last summer at the Wacken Open Air festival in Wacken, Germany. This performance marks the pinnacle of a highly successful album campaign in support of "War Eternal".

ARCH ENEMY will celebrate the release of "As The Stages Burn!" with a number of European shows with special support from LACUNA COIL and THE HAUNTED.