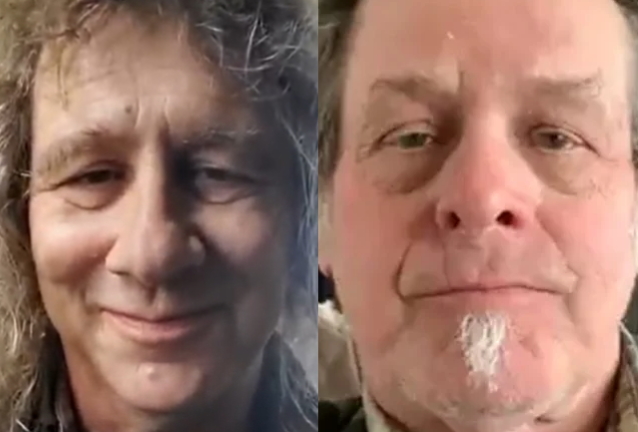 In a new interview with "The Chuck Shute Podcast", ANVIL frontman Steve "Lips" Kudlow was asked if he would ever debate outspoken conservative rocker Ted Nugent on some of the issues they are both passionate about. Lips responded (see video below): "It's interesting. He's definitely got different views, especially when it comes to marijuana; we'd probably be at each other's throats over that. But a lot of what he says is truth, logic and common sense. You can get angry at me — go ahead — but when you tell people the truth, they usually get pissed off, and that's what a lot of people get when they hear Ted talk.

"Certainly, if I was born in Detroit and was raised there, I'd believe that owning a gun is a necessity and a God-given right… I agree with Ted — making guns illegal only puts guns in the hands of criminals… Unarmed and helpless is unarmed and helpless. What can I say?

"There's a lot of things that he says that make sense," Lips added. "The other thing is statistically — he talks about statistics. He never says anything without the backing of real hard statistics. Gun-free zones have the highest fucking murder rates. They do. It's just as simple as that.

"Watch [Ted] on Piers Morgan," he said, referring to Nugent's 2013 appearance on CNN where Ted discussed gun control and gun ownership with Piers Morgan. "Piers Morgan tried to argue everything, and Ted walked all over him.

"I'm not gonna start waving the flag, 'Take the guns away from everybody.' Fuck that! There's a reason for everything, man. And the whole foundational aspect of America, if it wasn't for the gun… The whole being of America is written into its history due to the gun. How would you have fucking won the land? You didn't beat the First Nation people with bow and arrows. You won the land because you had guns — and they didn't. And the other thing is, we didn't win the Second World War with a pie in the face; we invented the atomic fucking bomb — the ultimate gun.

"What is human philosophy? What are we? We are a fucked-up animal, and we are at the top of the food chain, and the only way that we can keep the numbers down is killing each other."

Nugent, an avid supporter of former U.S. president Donald Trump, has repeatedly said that last year's presidential election was a fraud, insisting that "hundreds of thousands of dead people" voted and claiming that machines were "rigged" to give a Donald Trump vote to Joe Biden.

In 2019, Nugent defended Donald Trump after the U.S. president was accused of making racist remarks about Democratic congresswomen from black and minority ethnic backgrounds.