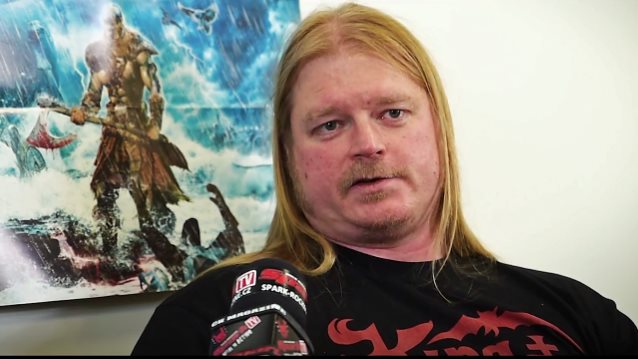 Spark TV, which is part of the Czech monthly magazine Spark, recently conducted an interview with guitarist Olavi Mikkonen of Swedish death metallers AMON AMARTH. You can now watch the chat below.

Asked if he thinks AMON AMARTH's latest album, "Jomsviking", is more "mainstream" than some of the band's earlier efforts, Olavi said: "No, it's definitely not mainstream, because it's not played on mainstream radio. And we never intend to be that. We still have the harsh vocals and all that. It's very downtuned guitars. But, of course, the music… AMON AMARTH today is definitely not AMON AMARTH twenty years ago, 'cause now we are more… I would say we are going towards traditional heavy metal, music-wise, and that's nothing that we planned; that's just the way things got. I mean, we all grew up listening to IRON MAIDEN, JUDAS PRIEST, ACCEPT… and then we discovered death metal in the early days when death metal began. So maybe now, the older we get as persons, we start listening more and more to the stuff we listened to when we were kids. So maybe that's the thing, or I don't know. It's nothing that we planned. We don't try to be commercial or anything like that. We only write what comes out from our hearts."

Olavi does believe, however, that AMON AMARTH's music appeals "more to traditional heavy metal fans compared to [that of] 'normal' death metal bands." He explained: "For us, melodies… I mean, since we have harsh vocals, we need melodies, 'cause otherwise everything will be really harsh, and none of us really like that. I mean, we don't have… IRON MAIDEN have very much melodic vocals, and we can't really do that, and that's why we do a lot of melodic guitar playing. But also IRON MAIDEN has a lot of melodic guitar playing as well. But I don't know… We just do what we think is cool, and what we like, and that's it. We don't really think in terms of trying to be a big band or whatever."

Jocke Wallgren was named AMON AMARTH's new permanent drummer in September. Jocke had been sitting behind the kit for all shows on the group's current "Jomsviking" world tour.